Homepage
You are here: Home1 / Mike Paradise2 / Two is Better Than One

If one Open III Trot is a worthy feature for a Sunday card then two must be twice as good for Hawthorne horse players.

That’s the case for tonight with a pair of quality trot events on the 11-race program. Both $7,200 Open II trots were handicapped by groups with the fourth race first division the stronger of the two.

Last week’s winner Primed N Powerful was assigned the outside post in the seven horse field after a comfortable four-length victory. The 1:54.2 mile was a lifetime best for the Jamaica Patton trained gelding. A win tonight would be the 30th in the 5-year-old’s career for owners Ron Phillips of Athena, Illinois and Sherry Boledovich of Lakewood Colorado. 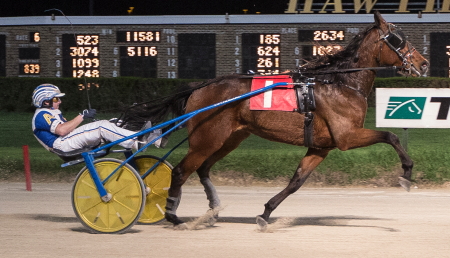 Regular driver Ryan Anderson is back to guide Primed N Powerful. The trotter’s significant post shift from the pole position Sunday makes the task of a repeat victory much more difficult and he takes on six opponents with the credentials to come out on top.

Sharing the Sunday limelight are the second round series of the Tony Salvaro for fillies and mares and the Phil Georgeff for colts and geldings.

The $8,000 Salvaro will get the program started with its eight-horse field headed up by first leg victor Star Of The Show (Casey Leonard). The Rick Schrock trainee meets First Official, Theresareason, My Kind Of Terror, ICY IYQ, Itsnotme Itsmen, Deo’s Perfectsound and Rosebud’s First.

The $8,000 Georgeff goes as race six and after Pop Speed’s (Tim Curtin) dominating four-plus length victory in round one, the Dale Knox trained gelding likely will be a heavy favorite again.

No Sweat: Unbeaten Fox Valley Gemini (Casey Leonard), the 2017 Illinois Harness Horse of the Year, hardly broke out in a sweat in his 3-year-old debut last night at Hawthorne, pulling away by almost four lengths in 1:55.1 with a 26.2 last panel.

The Terry Leonard Stable’s star pupil grabbed an easy lead from the one-slot, coasted to a 30.1 first quarter, went unchallenged a soft 1:00 flat half and then blew away his five ICF sophomore rivals in the lane for his tenth win in a row, this one at prohibitive 1 to 9 odds for owner Jim Ballinger of Atwater, Illinois.

A Bombshell Winner: The shocker of the night came in the second leg of the Mike Paradise series when Fox Valley Sinful, saddled with the 10-hole in an 11-horse field, came from far out of it and popped at 70-1 odds with Kyle Wilfong in the bike. 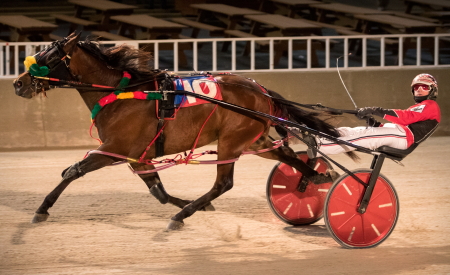 You’remyhearthrob (Kyle Wilfong) powered his way to the front before a 58.2 first half and had plenty left to hold on for a 1:54.3 victory for driver Kyle Wilfong in the first of two Bob Larry series divisions on the card

In the second Bob Larry split the Gerald Hansen Stable’s Et Tu Brute ($22.60) was sent to the top by driver Robert Smolin, and was nicely rated to a career fastest 1:55.3 mile. The 10-1 longshot, owned by Bernie and Deb Paul of Oregon, Illinois, finished a length and a half ahead of Lyons King.

Same Outcome The Open III Handicap Pace for fillies and mares turned out to be a repeat of last Saturday’s feature as Pretty Image ($4.40, Tim Curtin) and Narcian Jewel (Tyler Shehan) ended up one-two again, in that order. Rodney Freese trains the 1:55.3 winner Pretty Image.

Point Made: Last night’s Hawthorne mutuel handle of $754,072 was almost $100,000 more than it was a week ago on Kentucky Derby night with its 45 minute earlier first post. Both Saturday programs had 12-race programs.