We’ve seen it countless times, horses that did very little racing as 2-year-olds later turn things around in a big way at the age of three. While the reasons vary as to why, in the case of the ICF trotter Lourhianon, his Grant Park, Illinois trainer Kennedy Lindsey, points to what he says is two significant changes:

1. The horse is no longer interested in geese.
2. Alternative Medicine.

“Last year Lourhianon was a stud. This year he isn’t,” said the veteran trainer. “As a two-year-old he wanted to go out to the (Hawthorne infield) pond and play with the geese. After we gelded him he’s got his mind on working instead.” 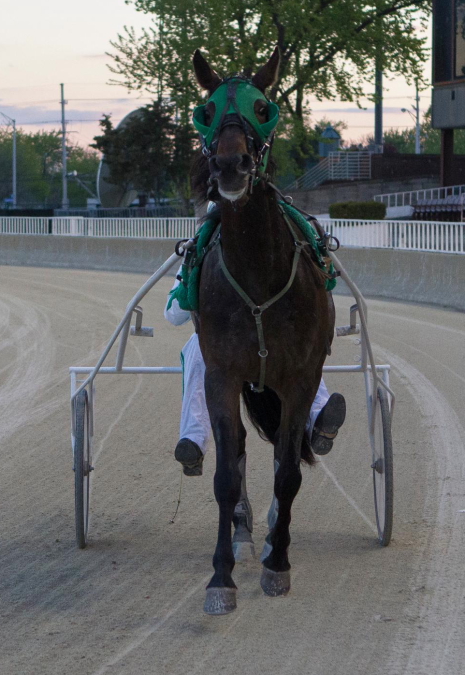 Lourhianon is shown on his way to the Hawthorne winner’s circle after last week’s second consecutive victory at the meet for trainer Kennedy Lindsey. (Four Footed Fotos)

While it was a steep price to pay for the trotter, it has been financially rewarding for Lourhianon’s owner, C. Lawrence Burney, also of Grant Park, IL. His horse went winless as a freshman in 13 starts and made less than $6,500. However, he’s two-for-three this year, with already $10,030 in purse earnings.

After a third place finish in early April at Hoosier Park in a needed start, his first in five months, Lourhianon raced first over and in his initial race of the Hawthorne meet and still nailed his maiden win in 1:59.3. Last week the son of Lou’s Legacy rallied with a quick 27.1 final quarter to take the first round division of the Daryl Busse series, this time in 1:59 flat for his newest driver Tim Curtin.

“I’ve always liked Tim’s driving. He’s especially good with trotters, so I was happy to get him to drive Lourhianon last week,” continued Lindsey, a native of Mississippi. “Tim did a good job of getting Lourhianon through the first turn and that’s where the horse has had some past problems . . . but not since we gelded him.”

We’ll be seeing a lot of Lourhianon through the summer months. “He’s staked to everything in Illinois,” said Kennedy. “The Night of Champions, Springfield, Du Quoin. Everything.”

As for alternative medicine factor, I’ll let Kennedy fill you in:

“I’ve gone to using acupuncture and chiropractic on Lourhianon and my other horses. I believe it has made a difference. They’re less sore and seem to be surer of themselves out there on the racetrack.”

While it’s a small sample, he has the early results to prove it’s working. Going into Friday night, Kennedy has started seven horses at Hawthorne and has come away with four wins and two second place finishes and his horses have banked over $20,000.

“The other night (Sunday), I had two horses in one race (Justlikehim and Moonshine Runner), and they finished one, two,” said the 56-year-old horseman.

Friday night Lourhianon has his work cut out after landing the outside slot in Hawthorne’s opener, the first division of the Daryl Busse Series. Awaiting him in round two of the series is: She’s First Class, John Swan, Jenas Art Ofvalor, My Dreamweaver, Joe Joe’s Violet and Captainblacksparrow.

The fifth race, second division, of Friday’s Busse series is headed by Larry Lee Smith’s Trouble For All, a 2:01.1 first leg winner. Drawing the one-slot should be a big plus for his Michigan owner and trainer. Posts two through seven, belong to Need To Focus, Lou Scion Lou, JL Dollarbill, Ivanka, Pauline’s Ashley and Banner Blue.

Leg two of the Walter Paisley filly and mare series has last week’s series victor Lilly Von Shtupp, starting out from the two-slot with driver Travis Seekman.  Brienne The Beauty is inside the Yankee Skyscaper filly while Angel Dance, Frontier Elsa, Bankin’On You and Dreams And Schemes have posts two through six, in that order.

Unbeaten Fox Valley Minka (pp 6, Casey Leonard), from the Terry Leonard Stable, no doubt will grab a good portion of the betting dollars in the Dave Magee series (race six) after her rather easy back-to-back Hawthorne wins.