You are here: Home1 / Two-Year-Old Summer Preview a Big Hit

Those doubters proved to be off base, and by a wide margin.

No less than 83 freshman state-bred pacers or trotters passed the entry box for today’s 2022 Summer Classic, making it necessary to card 14 races with four divisions for juvenile colt and filly pacers and three each for freshman trotters of both sexes.

The surprising large numbers of entries did slice deep into the purse money available ($20,000), dived up equally per race, to a lowly sum of $1,428 pots. 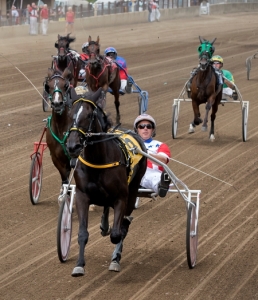 ICF two-year-old horses will be thundering down the stretch on the Illinois State Fairgrounds today when the Springfield Summer Preview gets under way. (Four Footed Fotos)

Nevertheless, most horsemen entered their youngsters not with purse money in mind, but an opportunity to get in a start, or maybe two, gaining welcome racing experience before Hawthorne opens (June 30th) and rolls out the two-year-old Violet and Cardinal stakes the weekend of July 8th and 9th, less than four weeks away.

The busiest person at the Illinois State Fairgrounds today will be trainer Roshun Triggs, who comes off his most successful yseason with 118 winners in 2021. The 44-year-old Mississippi native sends out 13 horses among the 14 races going to the gate.

Hope to has lots of help on hand.

Worth Eying: Looking at my past performance and breeding proofs, some horses that caught my eye include Al Beals Harleys The Moose (race 1) from the Gary Rath stable.  The Somebeachsomewhere filly of by Panfastic (her dam was the Illinois Hall of Fame horse Panic Attack), making Panfastic a half-sister to six pacers with marks of 1:51 or faster including the 2009 Illinois Horse of the Year and O & B Super Night champion Power The Moment, the winner of over $751,000.

The second race’s My Daddy’s Revenge is a Mike Brink trainee with a quick 1:57.3 qualifier on her card. The Revenge Shark filly is by Hope Lane Hanover who has two siblings racing with marks of 1:52.2 and 1:53.1.

The Nelson Willis stable’s Fox Valley Mckee in event eight is a half-sister to Fox Valley Lolo (1:53.1) and was acquired for $21,000 at the Walker Sale.

In the last race Lous Andiamo, another Trigg trainee, is the third foal of the dam And Word Hanover. Her first two are Lous Pisano and Lou Lou Lamour.

I would be remiss if I didn’t mention Smilin Lou in race 14. Afterall, the Lou’s Legacy colt is by Hoosier Wiggles, making him a full brother of 2021 Illinois Two-Year-Old Filly Trotter of the Year Funky Wiggle (1:56, $130,478).

Unique Sibling Happening: If it’s a rare occurrence to see two full brothers or sisters compete and both prevail on the same racing program, how about a pair of siblings doing it on the same card?

It occurred on the May 29th Springfield Preview when the Steve Searle Stable’s Lous Monamie won her three-year-old filly trot in the opener and Louscardamon, trained by Curt Grummel, later captured the ICF horse and gelding trot. Both trotters are by Lou’s Legacy out of the SJ’s Caviar mare Olives and Caviar.

Soon after Lous Monamie’s triumph, Searle’s Lous Xanadu, a daughter of Lou’s Legacy out of the Vaporize broodmare Fox Valley Lexus, took her division of the state-bred sophomore trot. Later her older sister, the six-year-old Louzotic, also from the Searle barn, proved best in the ICF four-year-old and up event, defeating the long-time Illinois trotting queen Annas Lucky Star. It was Louzotic’s 30th career victory in 82 lifetime trips to the gate.

That wasn’t the only unusual event on the May 29th Springfield card: The first four winning horses all had the same driver, trainer, owner and sire, something that I don’t ever remember happening in my 49 years of covering Illinois harness racing.

Casey Leonard did the driving, Steve Searle was the trainer, Flacco Family Farms the proprietors and Lou’s Legacy was the winning sire.

Casey would go on to bring home SEVEN first place finishers while Juan Franco was behind three winning horses on the 14-race program.

Watch Them Live: Hawthorne races at Springfield are on tap this Friday, June 17th and Saturday, June 18th. They are non-wagering events for ICF horses of both sexes and gaits.

While simulcasting is not available for these programs the races will be shown live on the Illinois County Fair Harness Racing page (https://www.facebook.com/groups/1966047640194826)

There will be also Hawthorne racing at Springfield on Friday, June 24th and Saturday, June 25th. Hawthorne is on yesterday’s (June 16th) Illinois Racing Board agenda requesting to also race on the vacate Thursday, June 23rd date at the Illinois State Fairgrounds.

Details on the upcoming Springfield cards will be posted on HarnessIllinois.com when they become available.