A week ago we took a look at how things have shaped up in the various Night of Champion stake series for ICF freshman pacers and trotters with two rounds completed.

We have three legs concluded in the 3-year-old series stake divisions, with only one round left before Hawthorne’s Saturday, September 22nd showcase evening of harness racing and a number of horses have wrapped up a starting berth in a 10-horse final field. 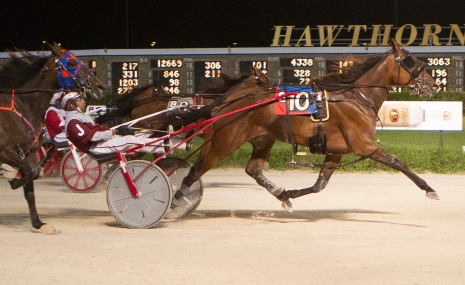 On the other hand, the view in the topsy-turvy Plum Peachy stake series for ICF pacing fillies got a bit fuzzier last weekend, when Party Belle (Travis Seekman), out of the Top Ten after two rounds, leaped into a tie for fourth place with Allbeastnobeauty (59 points), in the standings, when she picked a good time to come up with her first season win, a 1:55 clocking for trainer Tyler George.

The Sis Master, trained by her driver Michele Morgan, vaulted into a tie for first place with Rollin Coal with her second straight Plum Peachy series victory. Both fillies 100 points with Skeeter Machine close behind in the third spot with 75.

There was also a shake-up in the Beulah Dygert for second season filly trotters, when the Kim Roth trainee New Queen, nicely handled by Juan Franco, popped at 33-1 odds in Sunday’s third leg and went from barely being in the Top Ten to third place with 67 points.

Maui Mama’s second place finish moved her to the top all by herself, with 125 points when co-leader Good Design, made a break in the lane in strong contention and dropped to third (101).

In the case of the Erwin F. Dygert Memorial series, for second season state-bred male trotters, all the major players are “in” since only eight horses went postward last Sunday in a single division. 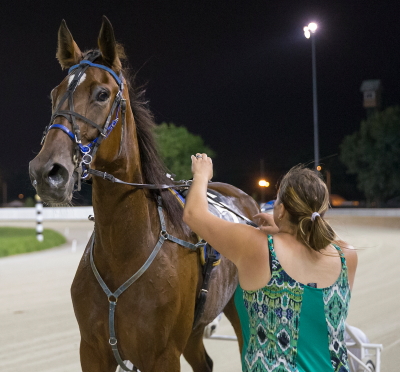 Third leg winner Majistic Caprice, from the barn of Roshun Trigg, is on top with 112 points, with Big Lou next (63), followed byTrue Detective (45), Illinimight (34), Don’t Be Cheeky (31) and Cruzin Cassie (14), in sixth. No other series trotter is in double digits and it’s a long wait to see who else will make the final.

With the Springfield State Fair meet starting up on Friday, August 10th and Du Quoin racing on August 28th and 29th, the fourth and last leg of Hawthorne’s Night of Champions 3-year-old series won’t come around until September 14th and 15th, a week before the championship night.

However, an upset in the final leg, would boost another longshot into the championship field when his current single-digit total would get significantly boosted by 50 winning points.