Homepage
You are here: Home1 / Mike Paradise2 / Violet Contest a Toss-Up or Not?

Now that the Cardinal pace divisions for freshman Illinois bred colts and geldings are in the history book, we draw our attention tonight to a couple of $45,000 Violet stake divisions for our TCF pacing gals.

The two Violet splits will go as races three and six with the first division pitting the winning fillies in the first round of the recent Incredible Tillie stakes—Rsmissashlee and Dandy’s MNM, and they landed the two inside slots in tonight’s eight horse field.

Since both won rather comfortably in their debuts and both drew nicely, you might think the first flash odds in the initial Violet division would have them fairly close to each other.

You would be mistaken.

That’s quite a discrepancy between the two stakes winning fillies since there was only two-fifths of a second difference between their successful winning miles contested on a “sloppy” racing strip, Rmissashlee went in in 1:56.4 and Dandy’s MNM in 1:57.1. Both paced a :27.4 last quarter, 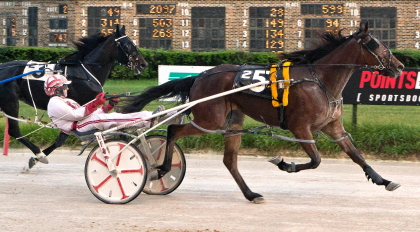 The Jim Roach trained Rmissashlee raced inside until mid-way through the last turn in her “Tillie” contest before powering past the pacesetter in the lane. Meanwhile Wilfing took the Merv Chupp filly right to the top had a snug hold on the filly through most of the race.

I see tonight’s first Violet division as more of a tossup.

Also note that Dandy’s MNM also took a much different route to her pari-mutuel debut to the Incredible Finale than her rivals Her California owners A Piece Of The Action chose to have her compete in the Kentucky Proud Series on fair tracks in the Bluegrass state, where she won two of four contests.

Besides Dandy’s MNM, The Erv Miller stable’s Lady Bombay (Atlee Bender) is also listed at 3-1 in the Hawthorne program. 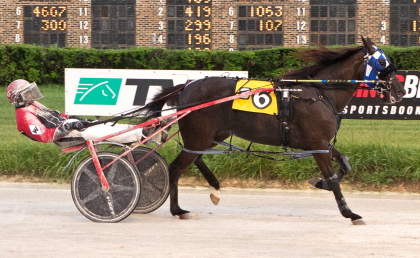 Fox Valley Captiva (Atlee Bender), another Erv Miller trainee, opens at 9-2 after her second-place finish behind Dandy’s DNM in their Incredible Tillie match.

Herman Wheeler’s Swanky Diamond (pp 2, Casey Leonard), a beaten 8-5 favorite, a week ago starts off at surprisingly 8-1 odds despite behind second in her Incredible Tillie competition to Rmissashlee.

Chalk Players Delight: The betting public got it right in each of last night’s $45,000 Cardinal pace divisions, as both 3-5 wagering favorites, Get Et Up and Fox Valley Ozzy were easy winners in their respective divisions.

Get It Up, trained by his driver Kyle Husted, finished more than a one length ahead of runner-up Magazine Theme (Todd Warren) in a 1:54.3 mile while the Gary Rath trained Fox Valley Ozzy was much the best in the second Cardinal split.

After settling in fifth in the early going, Casey Leonard had Fox Valley Ozzy rolling on the backside, taking command at the half, paced in a slow time of 59.3, and then drawing away from the second-place finisher Frontier Bombay in the lane by eight widening lengths at the end of a 1:55 flat mile.

In the $12,000 Open, He’zzz A Wise Sky (Kyle Wilfong) got revenge for last week’s loss to Fox Valley Gemini (Casey Leonard) with a one and one-quarter length win in a time of 1:50.2