The first of a pair of $26,700 Violet stakes on Saturday’s program brings out Allbeastnobeauty and Rollin Coal, winners of their respective Plum Peachy stakes series a week ago. It will be the first of several meetings of two of the top ICF 3-year-old pacing fillies in the division.

The fifth race first Violet division likely will see both of these talented fillies on the move early. They were last week when they raked in the winner’s share of $12,500 pots.

Driver Tim Curtin gave the Mike Brink Stable’s a pocket trip behind last year’s ICF freshman filly champion Fox Valley Jazz and Allbeastnobeauty put on a late burst (27.1) to pull away by two lengths in a career fastest time of 1:53.3.

Casey Leonard urged Rollin Coal out from the eight-post in her Carey division. She was parked out most of the first quarter but it was in a modest 29 flat. Things couldn’t have gone any better for the Sagebrush filly who went unchallenged through a leisurely 30.4 second panel.

Even though there was still a have mile to be raced, the outcome really wasn’t in doubt. Rollin Coal picked the pace up a notch with a 28 flat third quarter and her supporters by that time were probably figuring out how much of a return they were going to get on their winning wager.

Owned by her trainer Hosea Williams, Rollin Coal was full of pace and stormed home in 26.3 under a hold in her first start since last October. She now is less than $4,000 in purse earnings from reaching the $100,000 plateau for Williams. 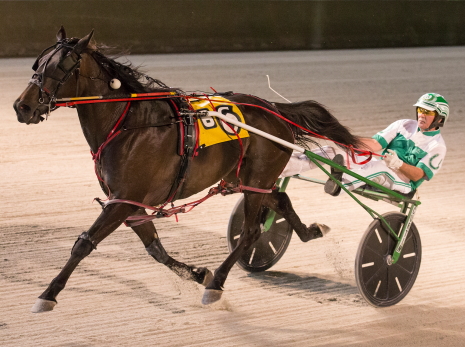 Four races later when the second $25,700 Violet stake division rolls around where last week’s two Plum Peachy bridesmaids, Fox Valley Jazzy (Ridge Warren) and The New Americana (Matt Krueger) will most likely be the betting public’s choices to step up to the altar and grab the $12,850 winner’s share of the purse. 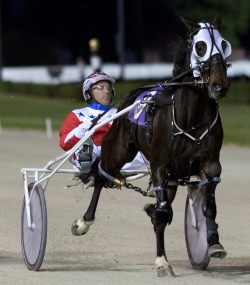 Fox Valley Gemini (Casey Leonard) stayed unbeaten Friday night. His win in the first division of the Cardinal pace was his 13th in a row. (Four Footed Fotos)

Chalk Up Another: Make that 13 in a row now for the unbeaten star of the Terry Leonard stable Fox Valley Gemini and driver Casey Leonard. Last season Illinois Harness Horse of the Year easily disposed of his nine rivals in Friday’s first $27,100 Cardinal pace division.

Casey hustled Fox Valley Gemini ($2.40) away from the nine-slot and dropped the overwhelming 1 to 9 favorite into fourth behind the pacesetting Dandy Dude. Leonard took Fox Valley Gemini out after the 56.4 half and the eventual three length winner powered past in the lane to remain perfect for Atwater, Illinois owner Jim Ballinger.

Dandy Dune (Ridge Warren) held on for second in the 1:52.4 mile while You’remyhearthrob (Kyle Wilfong) came on for third.

In the second $27,100 Cardinal pace division Travis Seekman gave Al’s Briefs ($8.00) a picture-perfect drive and the Clark Fairley trainee took advantage of it and nailed own his first victory as a three-year-old.

Seekman set Al’s Briefs out from the pole position and grabbed the pocket behind the front-stepping Molina (Ridge Warren) who was able to get his pacer to the half in a modest time of 58.1.

At the three-quarter pole, reached in 1:26.2, Seekman got Al’s Briefs out and rolling, zipping past the tiring pacesetter, and then withstood the late challenge of the 1 to 2 favorite Backstreet Lawyer to gain a one and one-half length triumph in 1:54.1 for Illinois owners Antony Somone (Willow Springs), Dave Mc Caffrey (Burr Ridge) and trainer Clark Fairley (Charleston).