I have to admit I was disappointed when the draw came out for the Violet stake. After watching Perch and Fox Valley Torrid dual in last week’s first leg of the Plum Peachy, with the former coming out on top by a head, a lot of us were looking forward to Saturday night’s rematch.

However that confrontation won’t take place until a later date.

Tonight’s Violet had to be divided into two $22,950 divisions when an even dozen ICF 3-year-old fillies entered. Perch went in to the second race split while Fox Valley Torrid drew into the tougher fourth race division.

The Jay Garrels trained Perch (Kyle Wilfong) will open at 4-5 after her game victory a week from the second tier. With no other second tier starter in the race driver Kyle Wilfong cleverly lined up the Duneside Perch filly behind Fox Valley Torrid (pp 4) in the Plum Peachy and the pair raced fourth and fifth through a 28.3 first quarter by the pacesetter Valar Morghulis. 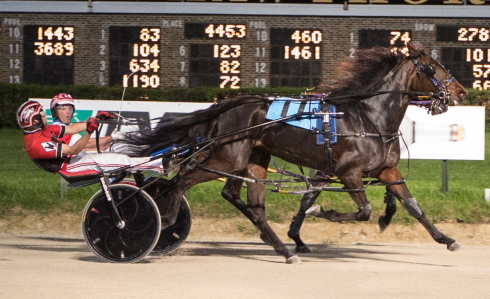 Perch’s biggest threat tonight appears to be the Megan Rogers Stable’s Lilly Von Shtupp, named after a character in the old and hilarious Mel Brooks movie Blazing Saddles. “Lilly” won the Incredible Tillie Consolation stake as a freshman and recently took a leg of the Walter Paisley series leg before getting sick and missing that final.

Even though Fox Valley Torrid drew the one slot in her Violet division and opens at even-money, last year’s 2-year-old Illinois champ is no slam-dunk in the fourth race second split.

Post three belongs to the Nelson Willis trained Fox Valley Halsey who got the worst of the draw in the Plum Peachy with the 10-hole. The 2018 Springfield and Du Quoin freshman titleholder came a long way to get last Saturday’s ICF stake’s fourth place money.

Valar Morghulis (pp 4, Juan Franco), another Willis trainee, was awarded third a week ago. She was second best to Fox Valley Torrid on the Night of Champions. Fox Valley Lolo (pp 6, Tyler Shehan) rallied from seventh in the lane to finish third last week but bothered a foe and was DQ’D to sixth.

The Bucket (Casey Leonard) kept Meyer On Fire (Tim Curtin) parked out through a 27.1 second quarter before he could clear to the top. The winner was all out to hold off the ground-saving runner-up Sporty McGrew (Kyle Wilfong) at the end of the 1:52 flat mile. The Bucket finished third.

In the first Cardinal division Kyle Wilfong guided Maximus ($4.00) to a soft 59 first half with Fox Valley Triton on his back and the Ken Rucker trainee went on to gain a neck victory with a career fastest time of 1:53.4. Cooter Luke was third.

Another Gem: Fox Valley Gemini dazzled the crowd in the $12,000 Open Pace by again going from last to first in the final quarter of the mile to make it 23 wins in 24 starts at Hawthorne.

Driver Casey Leonard had the Terry Leonard stable’s star pacer more than seven lengths behind turning for home but Fox Valley Gemini motored home in 25.4 to pull away to a two-length victory over Dash Of Danger (Kyle Husted).