The Jim Eaton Stable’s Walter White is expected to be a heavy favorite in Sunday’s $15,000 Open Trot Handicap and justifiably so after a rather effortless triumph a week ago in his Hawthorne debut.

The five-year-old gelding was assigned the outside seven-slot in the second race feature but Walter White was allocated the nine-slot last week and that didn’t prove to be much of a deterrent. Driver Kyle Wilfong comfortably got him to the top where he basically went unchallenged.

Trainer Jim Eaton doesn’t think his prized trotter will have it so easy this time around.

“I expect they’ll make it a lot harder for him,” said Eaton. “But he’s a nice trotter and he doesn’t need the front to come out on top. I told Kyle (Wilfong) last week he could drive this horse just about any way he wants. It doesn’t make a difference to Walter White. Put him on top, race him from far behind or put him in a hole, it doesn’t matter.” 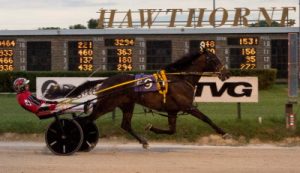 Walter White joined the Eaton Stable in November of 2015 after campaigning out of the barn of Jimmy Takter as a 2 and 3-year-old. The well-bred Cantab Hall trotter made almost $200,000 in his first two seasons for Takter and he did it winning only three races.

A $57,000 yearling buy (the next year his brother sold for $165,000 at Harrisburg) Walter White was auctioned off for a $33,000 bid to Eaton for his primary owner Bob Silberberg of Farmington Hills, Michigan.

“At the time of the sale we were a bit worried because he only went for $33,000. We thought he would go for more.”

Silberberg got his money back and a lot more when Walter White banked over $67,000 as a 4-year-old racing in Pennsylvania.

“Early on we were lucky enough to race him in non-winners of 4 and 5 events because when we bought him he had only three lifetime wins.”

One of those wins came in a $77,120 division of the International Stallion stake at Lexington, another in a $58,152 PASS stake at The Meadows.

Walter White took a $13,200 non-winner of four event at The Meadows in his initial start for Eaton and three outings later captured a $13,600 non-winner of five trot. The horse went on to win five more races for his new stable.

Thus far Walter White’s 5-year-old campaign is going even better. The gelding has added $72,325 on his card in 17 trips postward. Among his five season victories were a pair of $22,000 Open triumphs at Miami Valley Raceway in Ohio and a $21,000 Invite at Hoosier Park in late April.

“We’ve been easy as far as racing him with the hopes that like some trotters his best years will come as he gets older, added Eaton.” 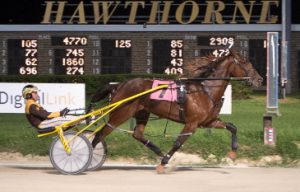 A Charming Victory: The 5-year-old ICF pacer Fox Valley Charm picked-up her first victory at the meet in Saturday’s eleventh race, a $10,000 conditioned race feature for filly and mare pacers. She was one of three winning drives on the card for Mike Oosting.

The 6-5 favorite got command leaving from the seven-post at the first quarter (29 flat) and after another modest panel (29.3) had more than enough left to put away the pocket horse Vintage Babe by one-plus lengths in a 1:54 flat mile.

Fox Valley Charm is trained by Rodney Freese and owned by Peter Karras of Sherman, Illinois.