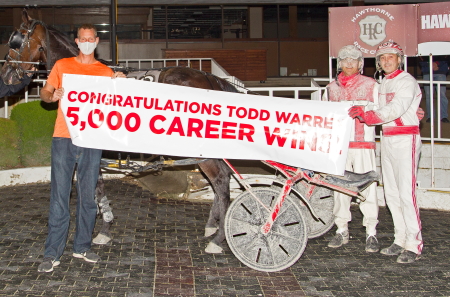 Warren began his driving career back in 1981 and has had 21 years of driving 100 or more winners in a season. He has surpassed 200 season winners eight times and delivered over 300 on three occasions with his best year coming in 2010 with 344,

Saturday’s Wrap Up: The ICF three-year-old pacers and trotters competed last night in their final series legs prior to next Saturday’s Night of Champion showdowns.

The first of a pair of $15,000 Plum Peachy sophomore filly confrontations saw the 2-5 favorite Sign Her Up ($2.80) zoom from last to first in the final quarter of the mile for driver Juan Franco. The Charles Arthur smallish filly was a half-length better than Sleazy Gal in the 1:55.3 mile (26.3 last panel) paced on a sloppy racing surface.

A few races later Fox Valley Exploit ($2.20) showed she’s more than ready for next Saturday’s Plum Peachy championship with a strong victory in the second ICF filly pacing division. Driven by her trainer Kyle Husted, the Sportsmaster filly accelerated in the lane and easily overtook her field with a 1:55 flat clocking. The four length win was Fox Valley Exploit’s seventh in eight season starts.

The Mike Brink trained Crooked Creek (Todd Warren) was hammered down by the betting public and won like an overwhelming 1 to 9 choice should in the first Kadabra trotting leg, drawing off by six lengths in his 1:59.3 mile.

The Tom Simmons trained Fox Valley Quest ($2.60, Casey Leonard) had no trouble winning the second Kadabra divison, going right to the front and pulling away to a four-length romp in 1:57.4

Casey Leonard had the Flacco Family Farm’s Lous Abigail on cruise control when the sophomore trotting filly crushed her opposition in the second Beulah Dygert Memorial split. It was the Steve Searle trained filly’s fifth consecutive victory and her sixth in 10 trips to the gate on the year. Without any urging the last eighth of her 1:59.3 mile on the rain-soaked track “Crabby Abbie” ended up almost 10 lengths ahead of the second place trotter Reign And Shine (Jordon Patton).

Driver Travis Seekman had his whip tucked under his right arm when Fox Valley Extacy ($3.80) flashed across the finish line first in the initial Beulah Dygert series division. The Hector Herrera training trotting filly covered the mile in 1:59.3 for season victory No. 5.

In Saturday’s finale He’zzz A Wise Sky, another 1 to 9 low-end favorite, easily won for the third time in a row in his leg of the Robert F. Carey Memorial. The Don Filomeno trained three-year-old home-bred was nearly four lengths ahead at the end of his 1:53 mile. 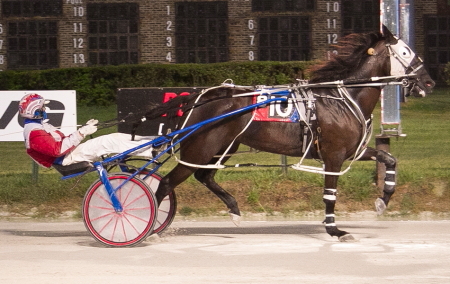 Will Lay Off Hurt? The five-year-old mare Lily Grace returns to the races after more than a month on the sidelines. The mare’s target tonight is another victory in the Open filly and mare division and her seventh consecutive win at Hawthorne.

However there has been a notable change since Lily Grace last competed.

The sixth race $10,500 feature will be her first trip postward in 41 days and that’s a significant gap between starts. Lily Grace was slated to go in the August 22nd Open but was be scratched because her trainer at that time went under suspension. The mare has since been relocated to the Terry Leonard Stable in Harvard, Illinois by her Trot & Pacing Racing Michigan owners.

The Leonard’s also have two of her stablemates in tonight’s Open, Lilly Von Shtupp (pp 6, Juan Franco) and Cracklin Rosie (pp 7). When Casey Leonard chose to drive the latter tonight, Ridge Warren got her first opportunity to handle Lily Grace who took her mark of 1:51 back on August 2nd on a sloppy Hawthorne racing surface.

Notice that tonight Lily Grace has been assigned the 10-hole in the nine-horse field and for a mare that prefers to race on the front-end, that’s not a good thing.

Both Lilly Von Shtupp and Valar Morghulis, from the Nelson Willis stable, had to take required byes into next week’s Tony Maurello Memorial final for ICF aged pacing mares and instead of racing for a $15,000 pot in last Friday’s Maurello elimination, they had to compete for tonight’s $10,500 purse ($4,500 less) or miss a week of racing with only two weekends left.