By Mike Paradise
The two-year-old pacers Fox Valley Jeter, Gabe Henry and Sporty Redhot, unbeaten in their first two legs of Hawthorne’s Incredible Finale stake series for ICF colts and geldings, look to add a third leg victory tonight.
All three have earned the maximum 100 point total after two rounds in the series and have wrapped up a starting berth in the $100,000 (est.) Final on Hawthorne’s Night of Champions on Saturday, September 10.
However, at least one of the freshmen will lose for the first time in the stake series because both Fox Valley Jeter (Casey Leonard) and Gabe Henry (Todd Warren) go head-to-head time in Sunday’s third race first division.
Fox Valley Jeter, a son of Sportsmaster, is owned by his trainer Jim Eaton (Beecher, IL), Phil Langley (Frankfort, IL) and Christine Buttice (Leesburg FL) got the edge in posts in tonight’s match-up when he landed the two post while the Tom Graham Stable’s Gabe Henry drew the seven-slot in the 10-horse field.
Gabe Henry, a son of Henry Clay, was bred by his Salem, Illinois owner Carol Graham. 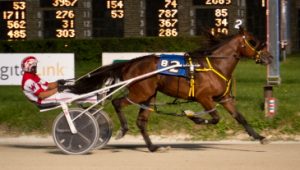 With back-to-back easy victories in the series first two legs and anther good post (the two) tonight Sporty Redhot should be a prohibitive favorite for trainer Kim Roth and her Berwyn, IL owner Al Beals. The Sportsmaster gelding posted 1:56.3 and a 1 55.1 victories and was well in hand at the wire in both conquests.
Al Beals has been an Illinois horse owner since the early 1990s and the financial wizard on the IHHA Executive Board for a couple of decades as well. While Al has owned dozens of horses who competed on the Chicago circuit all but a few were claimers.
In fact, I told Al I don’t remember any two-year-olds that he owned.
“That’s because of the five previous two-year-olds that I had, they made a total of $660,” replied the Berwyn, Illinois owner. “One made $340, one made $320 and the other three didn’t make anything. I think if Sporty Redhot can earn $125,000, which he won’t, I’ll be even with my two-year-olds.”
Why the switch to yearling buys instead of horses in the claiming ranks?
“I prefer to race claimers but there aren’t many races on the circuit for them anymore,” he answered. “Now the Race Office puts 2 or 3 classes in a single claiming race. If I want to come out to watch my horses I need to race 2-year-olds.”
Sporty Redhot has banked $12,500 for Al in his first two career starts and the top prize tonight is the winner’s share of a $15,000 purse so maybe Al is on to something. I’ve got Sporty Redhot at 3-2 in my line in the fourth race second series leg.
The seventh race third Incredible Finale split, a nine-horse field, has a first leg winner as one of the likely favorites. He’s Uptown Sleaze, a Nelson Willis trained son of Sagebrush, owned by his Buffalo Grove, IL owner Mary Engel.
Uptown Sleaze was a 1:56.1 front-end winner with tonight’s driver Kyle Wilfong in a June 25 first round division. The colt was kept sharp for this stake with a 1:55 flat triumph last week.
Among his strongest challengers Sunday night is the Joel Smith Stable’s Fox Valley Nemitz (Dale Hiteman), second best to Sporty Redhot earlier this month, and Sullivan (Casey Leonard) who hails from the barn of Springfield, IL conditioner Mike Brink.
After drawing posts 9, 8, 10 and 8 in his first four career starts his owners have to be overjoyed that Sullivan leaves from his first inside post (the 3) in race seven.
http://harnessillinois.com/wp-content/uploads/2021/03/ihha_logo_white_wtext_v2-300x130.png 0 0 Mike Paradise http://harnessillinois.com/wp-content/uploads/2021/03/ihha_logo_white_wtext_v2-300x130.png Mike Paradise2016-07-24 12:37:082016-07-24 12:37:08Weather Isn’t the Only Thing Red Hot