Homepage
You are here: Home1 / Mike Paradise2 / Wet and Wild Night for the Gals

In yesterday’s column the headline of the story read: “No Sure Things in Gal’s Late Closers” and that turned out to be one very accurate statement.

Maybe the rain and sloppy track at Hawthorne had something to do with it. Maybe it was just time for some fireworks to start off the three-day holiday. Whatever the reason or reasons early on it was obvious Friday night was not for chalk players.

The initial Late Closer (No. 10) came in the first race and when the even-money post time favorite Bucklegirl Bobette starting running right from the start, Jared Finn took Likeaforeballshot ($7.40) to the front and the filly went on to post a 1:55 clocking when the track was still fast

One event later in a maiden race the Donna Holt Stable’s Vital Trnsformation (Kyle Husted) stunned the Friday night crowd at 51-1 and paid $104.80. In the very next race, the $13,000 Late Closer (11) produced an even little bigger payout when Perry Smith’s Rocknrol’s Image (Tyler Shehan) lit up the board at $106.60 as the 52-1 bested the heavy 1-2 favorite Jiggles The Clown by two lengths.

The next Late Closer (No. 15) for the mares was a couple of races and a rainstorm later and this time it the 2-1 post time favorite Prosper who went down to defeat as Joyful Game (Matt Krueger) put on one of her patented big late rushes and came thundering down the lane to get up in time on a sloppy track in 1:57.1, edging out Sure You Are by a neck at $13.60.

Before another Late Closer championship was contested Deanna Cozzi’s mare Thedayyouhavemade (Todd Warren) popped at 20-1 in race six and retuned a handsome $43.20, keying the winning 20 cent Superfecta of $4,510 on a 3-7-1-10 ticket.

The next Late Closer (No. 16) to be decided for the gals was the $17,600 featured event for distaffers with over $1,000 in earnings per start and this time the 1 to 5 prohibitive favorite Fox Valley Charm was upset by Bernie and Deb Paul’s Seeyouatthefinish ($15.60) who did it in front end fashion.

Nicely rated by her driver Kyle Husted, Seeyouathefinish shot to the front where she was able to pace consecutive 29.1 quarters to the half on the sloppy track and come home in 27.4. Her 1:54.1 mile had her 1 and 1/2 lengths ahead of runner-up Feetonthdashboard Fox Valley Charm took third.

Once again the favorites in the last Late Closer (No. 13) of the night could not live up to their expectations. The ninth race $13,400 series final saw the 17-1 longshot Awesum World ($37.60) take advantage of a pocket trip given to her by her driver Ridge Warren. The Steve Searle trainee finished more than ore length ahead of another longshot (14-1), the Kelly Chupp Stable’s Eva Bella in the 1:56.1 mile.

More Success Very Likely: A pair of Late Closers for colts or geldings head-up Saturday’s card but unlike last night when they were a number of wide-open vents for the gals, tonight one of the wo finals looks like a slam-dunk. 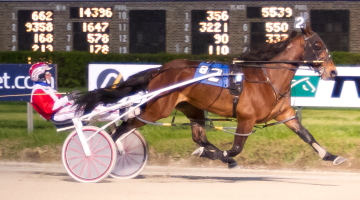 Only five pacers will change the rampaging Roger Welch trainee Ontario Success in the $17,400 Late Closer (No. 7) for winners of over $1,000 per start.

I’ve got Ontario Success (Casey Leonard) at 1 to 5 in my line and he could go off even lower at 1 to 9. The talented pacer breezed in both of the first series legs and is now 6 for 7 at Hawthorne for the year and may have run out of competition on the big in-town track.

On the other hand the $15,400 late Closer (No. 6) that follows looks to be a very spirited final. Both Southwind Scorpion (Matt Kruger) and Sunset Dreamer (Kyle Wilfong) were late charging winners in their respective first two legs of the series of non-winners of $1,000 per start.

They’ll meet tonight for the first time in the eighth race showdown.

Mr. Coolie (Todd Warren) got out and rolling a little too late and was only a nose behind Sunset Dreamer while the front-stepping Big Brad (Casey Leonard) had a solid effort to be third,

Officially Yours owns a 1:54.1 victory at the meet and Victor Bayama took an early May conditioned pace in 1:53.4.