By Mike Paradise
In northeastern Louisiana trainer Herman Wheeler is busy getting his horses ready for the upcoming Hawthorne harness racing meet. When opening night comes around on May 11, the 47-year-old horseman plans to have 20 head ready for action.  “I’ve got a few Illinois bred 2-year-olds I’ll bring up for the stake series,” said Wheeler.  I also have a couple of three-year-olds that will also make the trip north. They didn’t race as 2-year-olds because they were too immature. They’ll be ready for Hawthorne.”

The pride of the Wheeler Stable won’t be making the long 900 mile trip up from Herman’s farm in Monroe, Louisiana to the Cicero, Illinois racetrack. 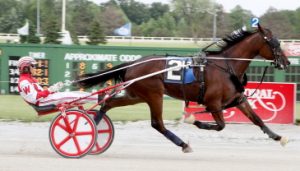 “Fox Valley Qatar looks like he won’t race this year,” continued Wheeler.  He didn’t do well last season as 4-year-old. The horse had some health problems and only raced a half-dozen times. I trained him back this year down to ‘18’ but then he came-up with the same problems as last year so I stopped with him. He’s a good horse and he’s been good for me. I’ll give him all the times he needs before bringing him back.”

Fox Valley Qatar was an ICF sensation in his freshman season, winning his first eight starts before a second place finish in the Lincoln Land Final, the gelding’s last start in 2014. Along the way he captured the $48,000 Plesac Final at Balmoral and both the Springfield and Du Quoin State Fair championships.

The son of Pizzazzed, out of the King Couch broodmare Armbro Bahrain, raked-in over $84,000 in his initial season. In 2015 he went postward 14 times and posted an impressive record of 5 wins (including the Cardinal), 5 seconds and 2 thirds while adding almost $48,000 to his card.  Last year “Qatar” went winless in six trips behind the starting gate. He had one second and a trio of third place finishes when he earned a disappointing $4,331. Wheeler plucked Fox Valley Qatar out of the 2015 Walker Standardbred Sale for a modest $7,000 price tag.

Freebee for Matt: Some 1000 miles or so east and south of Wheeler’s balmy winter headquarters Illinois driver Matt Krueger is enjoying what can be called a “paid vacation” at Pompano Park on the even warmer southern east coast of Florida.  “I came here in January with my one-horse (the trotter Sand Swan) for a bit of a winter holiday and it’s turned out a paid vacation for me. The horse has made over $9,000 since I got here. He hasn’t missed a check in six starts,” said the 42-year-old native of Manteno, Illinois.  Sand Swan won his Florida debut on January 15, giving Krueger a $3,250 paycheck for his birthday, one day later.  Kruger had more driving opportunities (713) last year while horses he drove had earnings of $514,771, also a career high for Matt. Among the Illinois bred horses he drove last year at Hawthorne were Royale Rose, Sporty Redhot, Roma Falls, Fox Valley Hoss, Joyful Game, Ashlee’s Fine Lady, She’s Savvy, and Fox Valley Dandy. 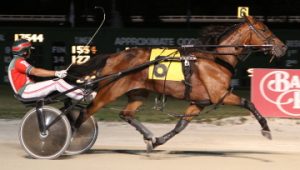 The 2016 ICF Aged Horse Trotter of the Year, Run And Tell Pap is still going strong at the age of ten. On Tuesday night he was an easy front-end 1:56.2 winner on a sloppy track in a $13,500 conditioned race at Miami Valley Raceway.  It was the son of High Fall’s 62nd lifetime victory and brought his career earnings to $660,289. As a 2-year-old Run And Tell Pap captured 15 of 19 starts for trainer Leo Grummel including the $110,000 American National at Balmoral Park with driver Mike Cox when Dr. Patrick Graham of Pittsfield, Illinois owned the horse.

On Monday evening the now 4-year-old Primed N Powerful (Trace Tetrick) took a $9,500 conditioned trot in 1:57 with Dale Hiteman at his lines for trainer Illinois trainer Doug Graham. In his first two seasons the son if Psychic Spirit made 18 trips to the winner’s circle that encompassed triumphs in both the Springfield and Du Quoin Finals as a 2-year-old and amassed over $70,000 coming into this year. He’s added another $13,400 thus far in 2017 for owners Ron Phillips (Athens, Illinois) and Sharry Boledovich (Lakewood, Colorado).

A few events later the Kathy Millman trained mare Rev Me Up showed she can also still get the job done as a 10-year-old when she won a conditioned pace in 1:54.3 for Indiana lessee Merl P’Pool. It was career victory No, .46 for the Park Place mare out of the Cole Muffler broodmare Turbonium and pushed her career earnings to $652,694.