Homepage
You are here: Home1 / Mike Paradise2 / “Whiskers” Gets Called Back into Action

By Mike Paradise
One week your filly is racing for a $100,000 purse and the next she’s taking on some of the same distaffers with a $5,500 on the line. Welcome to the Chicago harness racing circuit,
The Kim Roth trained Whiskersonkittens put away her ICF three-year-old filly foes in the Plum Peachy Championship in a convincing manner with a 1:52.4 mile and more good fortune smiled down on the when she was made eligible to compete in Friday’s rather low-end conditioned pace.
And she’s not alone. The Plum Peachy runner-up JK’s Nancy Lee also is a starter in the tenth race and so are two other Plum Preachy combatants, Lexington Lady and Likeafireballshot, growing the number of starters in the race to ten.
Any earnings made on the Night of Champions were not considered in the conditioned pace for fillies and mares. 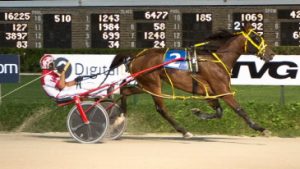 Fresh off a victory in the $100,000 Plum Peach Championship Whiskersonkittens (Todd Warren) is back inaction Friday night. (Four Footed Photo)

With an insufficient number of mares entered for what started out as a non-winners of $3,000 in their last five start, the Race Office added to the conditioned line: Also Eligible” Illinois Conceived and Foaled three-year-old fillies” and called the trainers to the sophomore fillies to see if that was o.k. for them,
And the key word in that last written sentence was “called.” Earlier in the meet those phone calls weren’t made much to the ire of many trainers and their owners.
Instead just a “switcheroo” to another race was made to bulk up the number of starters for that race without the knowledge of the trainer entering his or her horse.
“I got a call from Robin (Assistant Racing Secretary Schadt) that she added ICF 3-year-old fillies are eligible to the conditions of the race and asked if she could use my horse. I told her that would be okay,” said trainer Kim Roth.
“I wasn’t getting these kinds of calls when the other guy was running the race office.”
Robin has taken over the heavy work load, including the drawing of races, in the Hawthorne Race Office since Race Secretary Pete Hanley went back to Rosecroft to resume the Maryland track’s race secretary duties that also made him unavailable in Illinois for the first two months of Hawthorne’s five month meeting
Whiskersonkittens delivered Kim Roth her first ever Super Night Championship as a trainer and the home-bred’s season earnings shot up from $42,139 to $92,139. A win tonight would be worth another $2,550 more. Not a lot of dough but a lot better than the horse being in a stall this weekend collecting zip for her owner
No Throw Outs Here: One of the races on tonight’s card was written back this week that is to say the least, interesting. It’s a $4,000 claimer (ninth race) for horses without a win in 2016 and 4 of their last 5 starts had to be at Hawthorne.
At first I wasn’t so sure if I liked a race put together with just winless season horses but the more I thought about it, the more sounded like a good idea. It’s a keeper for a late meeting race.
In separate races these ninth race horses would likely be “throw-outs” by the bettors. In one race they aren’t because they’re competitive against each other.
Also one happy owner will get a long overdue get a winner’s circle picture and can smile about a $2,000 check to go along with it.
A race secretary has to come up with competitive races with the cards dealt. In this case Robin wasn’t doled out any Aces (together this field has gone a combined 160 races without a victory). Nevertheless I believe the ninth handle will hold its own with most of some of the other races Friday night because its’s competitive and that makes for a perfect start to the Late Pick Four wager.
http://harnessillinois.com/wp-content/uploads/2021/03/ihha_logo_white_wtext_v2-300x130.png 0 0 Mike Paradise http://harnessillinois.com/wp-content/uploads/2021/03/ihha_logo_white_wtext_v2-300x130.png Mike Paradise2016-09-16 12:45:382016-09-16 12:45:38“Whiskers” Gets Called Back into Action