Homepage
You are here: Home1 / Mike Paradise2 / Who will come away as Springfield Champions?

Eight Illinois State Fair Colt Stakes Championships are scheduled to be decided Wednesday afternoon, four each in the 2 and 3-year-old divisions. The four freshmen finals will go for $27,500, the quartet of sophomore championships for $25,000 each. First post is 11 am.

The weather prediction in the Springfield area for the next few days is rain but hopefully the forecasters will swing and miss on their prognosis. In the interim let’s take a look at my prognosis on of each Springfield championships. 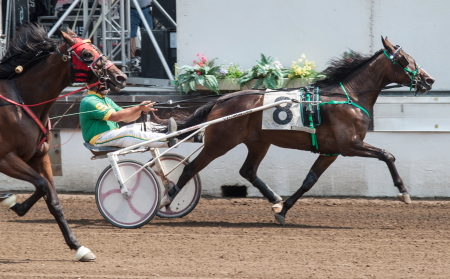 Last Saturday’s elimination winners Louzotic (Mike Oosting) and Encantado (Casey Leonard) have met twice thus far in their brief career with each notching a victory. Encantado beat Louzotic in their Violet match-up and the Steve Searle trained filly returned the favor in the second round of Hawthorne’s Fox Valley Flan series leg. Both trotters won rather easily last week and will get much of the public’s support.

Heidi High (Charles Arthur) should provide the early speed from the rail but she’ll be pushed from the get-go, perhaps from Encantado and Puddin Cheeks (Jared Finn). E L Game On (Kyle Wilfong) and Loussolataire (Kyle Husted) are also notable threats. The latter has been a busy 12 for 23 already in her first season.

Look for Louzotic to be finishing strong in the lane.

Brienne The Beauty (Travis Seekman) went into her elimination as the pre-stake favorite but came up empty last Saturday and was a non-contending fifth final. Obviously she wasn’t herself. I’m expecting better from her as she likely races on or near the front.

Fox Valley Lil Kim (Tim Curtin) beat Brienne The Beauty and the fast improving filly could be coming on strong again. The same can be said for Perch (Kyle Wilfong). It looks like she’s best racing with cover. Can Perch come from far out of it with today’s nine-post? Inside of her is Fox Valley Halsey (Casey Leonard), third or better in all seven career starts, and she has shown gate speed. For that matter so have most of the fillies in the race.

Through the years no ICF divisions have been more unpredictable that the freshman trots and last Saturday’s first elimination was a prime example. Most of us thought Fox Valley Picaso, winner of the Cardinal and two legs of the Kadabra, and Louscardamon, an easy winner in his last Kadabra stake, would be in this championship but both instead will compete in the third race Consolation of this stake after going off-stride Saturday

Trixie’s Turbo (Jared Finn) won that elimination with John D Finn driving and now has notched four wins in five career starts, including a pair of Kadabra legs. The young trotter’s only loss came when he didn’t make the gate back on July 15. With the 3-slot today, he’s a major player.

So is last week’s other elimination victor Lousraptor (Tim Curtin) who breezed. However he has the 10-slot today and on this track that means starting in the second tier behind No. 1 Foxvalleyrushhour. Or will he be behind Trixis’s Turbo when the gate swings open? With no other horse in the second tier driver Tim Curtin can line the freshman anywhere in the second tier.

Big Garcia Vega the beaten favorite in his elim, gets Casey Leonard at his
lines for the first time and will the probably post time favorite. He most likely will be sprinting out and so will most of the trotters with outside posts.

The Bucket (Casey Leonard) has risen to the top of this division and with a nice draw (post three) he could use an early move and go on to extend his winning streak to five in a row.

However, with two-year-olds and a 10-horse field in mid-August, that’s no certainty.

Mr. P M, driven by his trainer Cliff Bell, looked very good winning his elimination last week. The Sagebrush gelding is 3 for 5 to start off his career and is unbeaten when he has stayed on stride.

Ryan Racketeer (Ronnie Gillespie) put on a game effort against Mr. P M and probably will be motoring out again. There is also speed from the rail with Frontier Muffler (Freddie Patton Jr.), no doubt helping the trailer Maximus (Kyle Wilfong) who looked so good in July but disappointed as the 2 to 5 favorite last Saturday. Coming Up has also shown he can leave in a hurry.

The division leader Good Design didn’t make the trip to Springfield making this pretty much a wide-open championship.

The Steve Searle trained Trotting Grace (Kyle Husted) won last week’s prep and looked good doing it. She appears to be the filly t 3, Juan Franco) however she went off stride last Saturday.

Trotting Grace’s stable-mate White Pants Fever (Ridge Warren) earlier won a division of the Violet but has dropped her last five in a row. The filly made an early break last week, fell about a dozen lengths behind, and still rallied for third.

Then there’s Maui Mama (pp 7, Casey Leonard) to consider. She’s been first or second in all of her six sophomore starts and has never finished worse than third in her 15 career starts. 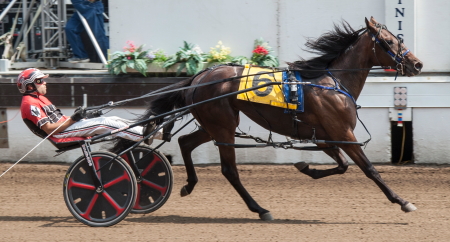 Perch (Kyle Wilfong) will have ro come from the outside nine-slot to get a repeat victory in today’s 2-year-old filly pace championship. (Four Footed Fotos)

Majestic Caprice was put on Lasix three starts ago and hasn’t loss since. Mike Oosting took over his lines in the geldings last two starts and he put the trotter on the front in each of his Kadabra and Springfield elimination wins. Look for Oosting to send out the likely public’s betting choice.

Big Lou (Kyle Wilfong) is racing well now and could be a favorable trip away from mowing this field down in the lane. However, with a trailer Big Lou may have to come from far out of it and hope to avoid traffic problems.

Don’t Be Cheekie (Ronnie Gillespie) has speed from the inside that has to be respected.

This has been an evenly matched division all season long and you can make a case for a number of fillies to come out on top.

The Sis Master (Michele Morgan) gets a huge change in posts. The filly likes to be on front and it took a fast 27 first quarter to get there last Saturday when she left the nine-hole. The filly has a big shot from the rail.

Fox Valley Jazzy (Ridge Warren) looks like she’s back in top form after being scratched sick back on July 21, missing a leg of the Plum Peachy. The filly was involved in last week’s hard first quarter and still was fighting hard at the end. I’m expecting her to be hustled out.

It’s been an up and down sophomore season for Allbeastnobeauty (Mike Oosting) and last weekend she was at or near her best won handily with Oosting who may have to race her first up today.

Rollin Coal (Casey Leonard) has had some tough trips in her last couple of losses and could be a favorable journey away from coming out on top in this final.

We now know Fox Valley Gemini can indeed be beaten but it’ll no doubt take another very brisk mile to do it. A 1:50.3 clocking ended his streak last weekend. 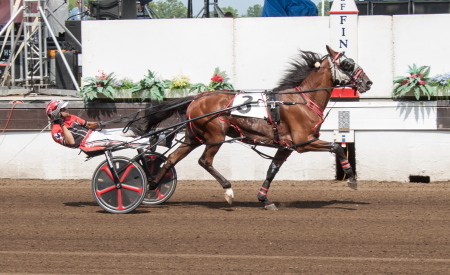 You’remyheartrob (Kyle Wilfong) sped to a 1:50.2 clocking when he ended Fox Valley Gemini’s unbeaten streak at 16 in a row. (Four Footed Fotos)

You’remyhearthrob was impressive knocking off the division leader. It’s a rare sight to see a 3-year-old ICF pacer speed to a sub 27 first quarter (:26.3) and still come home under 27 seconds (26.3) nevertheless that’s exactly what Youre’remyhearthrob did to end “Gemini’s” unbeaten streak at 16 in a row.

You’remyhearthrob (Kyle Wilfong) will need another rapid first panel for him to get command. A couple of major differences this week is that the talented gelding starts from the seven-slot, not the three, and that Backstreet Lawyer (Mike Oosting) competes unlike last week when the Tom Simmons trainee was parked out most of the way to a 26.3 first quarter in another elimination and never really got a breather in his mile when he finished second.

Fox Valley Gemini again drew the rail and driver Casey Leonard will likely urge his pacer out to protect his post position. The pride of the Terry Leonard stable also came home in 26.3, a time that this week could be good enough to start a new winning streak.

Don’t overlook Al’s Brief (Travis Seekman), a recent Lasix user. He’s sharp again and was only about a neck short of Fox Valley Gemini last week. Al’s Brief’s 26.2 last panel in his elim should get your attention.