Driver Kyle Wilfong and trainer Herman Wheeler were the stars of Friday night’s bevy of ICF stake eliminations or series legs that determined next week’s finalists on Hawthorne’s Night of Champions.

Wilfong drove five winning horses on the 13-race program while Wheeler sent out four youngsters from his barn and three were first place finishers,

Here’s how it all unfolded last night.

Still the Queen: The ten combatants for next Saturday’s Plesac championship were decided and the first $15,000 elimination for ICF trotters aged three and up didn’t go quite as expected.

Talk About Valor (Travis Seekman) was hammered down to 2-5 odds after an easy win last weekend in the Open but he found Illinois trotting queen Annas Lucky Star (Kyle Wilfong) too tough.

Trained y Nelson Willis for Salem, Illinois owner Daddy Graham, the seven-year-old mare took command out of the first turn and was never headed, trotting the mile in 1:55 flat for her 47th career triumph in 98 trips postward.

Talk About Valor got an advantageous two-hole journey from Seekman however he finished almost two lengths behind Annas Lucky Star. Also moving om to next week’s Please Final from the first Plesac elimination were Louscardamon, Heath Bar and Lousraptor.

Later in the evening odd Warren drove Cruzen Cassi ($12.00) to a 1:56.4 victory in the second Plesa elimination. Also advancing to the championship were Primed N Powerful, Louzotic, Reign And Shine and Fox Valley Extacy.

Sisters Act: It was the two sisters Allbeastnobeauty (Todd Warren) and Fox Valley Exploit (Kyle Husted) that showed the way in The Tony Maurello Memorial eliminations.

The seven-year-old Allbeastnobeaty breezed in 1:53.3 while her younger four-year-old sibling Fox Valley Exploit was much the best with a 1:53.1 clocking.

They’ll be joined in the Maurello championships by Dune Dame, Shelly On My Mind, Rollin Coal, and My Uptown Girl, along with Skeeter Machine, Fox Valley Lolo, Harper, and Ashlee’s Joy, the second through five finishers in their respective elims.

Lofty Opportunities Next: The last legs of the Night of Champion series for two-year-olds of both gaits and sexes made up most of the Friday program.

The first $20,000 Incredible Finale division for first season state-bred colt and gelding pacers was the much-anticipated rematch between Fox Valley Ozzy (Casey Leonard) from the barn of Gary Rath and Kyle Husted’s Get E Up, who snapped “Ozzy’s” six-race unbeaten streak at Springfield.

The 1 to 5 prohibitive favorite Fox Valley Ozzy got his revenge with a two-length victory in front-stepping fashion over Get E Up in a time of 1:54 flat with a 26.3 last quarter,

Fox Valley Crete picked a good time to notch his maiden victory by powering past in the late going for driver Kyle Wilfong in the second Incredible Finale division. The 7-2 second choice zipped past the 2-5 public’s choice Kingofmyheart (Atlee Bender) with a 1:56/1 mile.

The $20,000 Fox Valley Flan divisions for freshman filly trotters went to the Herman Wheeler stable’s Creations Dream MV (Kyle Husted) in the first split with a 2:00.2 clocking while Funky Wiggle (Kyle Wiilfong) nosed-out Armbro Lark (Charles Arthur) at the end of a 1:58.2 mile in the second “Flan” grouping. It was the fourth consecutive win for the Curt Grummel trained filly and the Dr. Patrick Graham homebred’s seventh in 11 first season starts.

Another Herman Wheeler trainee First And Goal (Kyle Husted) was bet down to 1 to 5 in the first $20,000 Kadabra split and coasted to a 2:01.4 win against four other ICF juvenile male trotters. The Mike Brink stable’s Fox Valley Cairo (Ridge Warren) prevailed by two and one-half lengths in the second Kadabra group in a time of 1:59 flat. 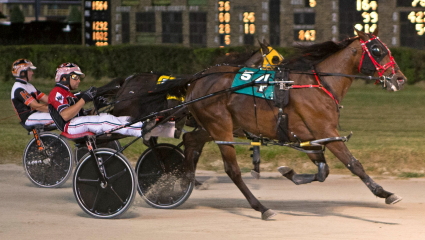 Apple Valley (Kyle Wilfong), coming from sixth at the three-quarter pole, flew down the lane at 5-1 odds for trainer Jim Molitor and overtook the 2-5 Incredible Tillie favorite Dandy’s MNM (Kyle Husted) in the Incredible Tillie first division for juvenile filly pacers. The winner’s time was 1:57.1.

Swanky Diamond (Casey Leonard) gave conditioner Herman Wheeler is third winner on the card when he upset the heavy favorite Rollnroz (Archie Buford) in the second “Tillie” division that went in 1:57.3. It was the World Of Rocknroll’s maiden victory.

The Robert S. Molaro prep for aged state-bred male pacers turned out to be an easy win for He’zzz A Wise Sky (Kyle Wilfong) after the John Filomeno speedball was able to go to a comfortable 28.1 second quarter in his 1:50.2 mile.

Stick Around: It’s the $15,000 final round Saturday evening for all four Night of Champions stake series for three-year-olds of both gaits and sexes.

The eight-horse Beulah Dygert Memorial for fillies is another rematch between Loulita (pp 2, Casey Leonard) and Breeze At Sunset (pp 5, Atlee Bender). Between them they’ve dominated this season’s ICF three-year-old distaff trotting division.