Congratulations go out to long-time conditioner Brett Wilfong who posted his 1,000 career victory as a trainer last weekend at Hawthorne with his homebred pacer Feel Like Dancing, driven by his 24-year-old son Kyle.

The 54-year-old trainer and his wife Candice now have a farm in Pendleton, Indiana with their horses racing both in Illinois at Hawthorne and in Indiana at Hoosier Park.

Second Chances: Round two of Hawthorne’s Late Closer Series get under way with Thursday’s program.

On tap is a trio of Late Closers (No. 17) for ICF trotters without two wins or $10,000 in earnings as of April 1. First leg winners Mr. Strata (Casey Leonard), Fox Valley Diamo (Casey) and Hail Caesar (Travis Seekman) both drew into the same division this time around and will battle it out in race five.

The $5,000 claiming series (No. 8) has two splits with opening round winners Mystical Walter and Donald Himself skipping Thursday’s second leg. Both pacers sewed up a starting berth in next week’s $9,000 final with their triumphs. Skyway Jaylo finished almost 10 lengths ahead a week ago with his career fastest 1:56.3 mile. 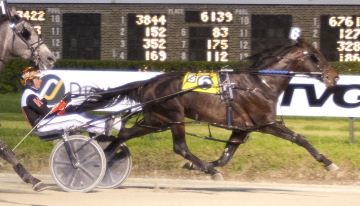 Sunday Shocker: There was a major surprise Sunday night among the seven Late Closer Series races and it was a biggie when the Claude Gendreau Stable’s Major Legacy popped at 63-1 with driver Kyle Husted in the second split for open company pacers without two wins or $20,000 in earnings.

The 1:54.1 mile knocked off more than three seconds of the 3-year-old geldings previous best time of 1:57.2, taken in a Balmoral qualifier last year. Major Legacy’s $128 payoff thus far is the highest of the young summer meet.

Citizen Kane’s (1:56.2, Ridge Warren) win in the third division of the Late Closer Series for Illinois-breds non-winners of two came in gelding’s secondt career start and it came at the age of five for trainer Tim Barbre. The homebred was unraced 2, 3 and 4.