Homepage
You are here: Home1 / Mike Paradise2 / Will Initial Trot Series Leg Come Up A Daisy?

The second night of racing at Hawthorne will have its center of attraction on the opening legs of two trotting Late Closer Series—the Bea Farber for non-winners of $30,000 lifetime (ICF $45,000) and the Daryl Busse for those trotters without $10,000 in earnings (ICF $15,000).

One of the local hopes in the Bea Farber is the Steve Searle trained ICF 3-year-old filly Daisy Lou Duke (Kyle Husted) who finished her freshman campaign on a high note and followed-up with an notable downstate qualifier preparing for tonight’s sophomore bow. 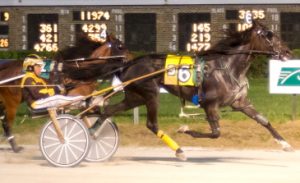 Daisy Lou Duke won the $16,990 Violet Final last September 25th in comfortable fashion for Illinois owners Patrick Graham (Pittsfield) and the Flacco Family Farm (Alexis) and then was turned out for the winter.

The daughter of Lou’s Legacy returned to the racetrack a few weeks ago in an April 21st qualifier at Springfield with her trainer in the bike she came up and had a surprising strong 1:58.1 winning qualifier (28.2 last quarter), when you consider the filly’s long seven month layoff.

“She did it all on her own said the 57-year-old Searle. She really trotted well. I was extremely pleased. You never know how tight they are going to be (in their first qualifier). I’d been in 2:07 a couple of times with her at the farm track where I’m at (Grant Park, IL). I told (her owners) Dr. Graham and Dr. Flacco I would only race her the last quarter of the mile in her qualifier and that’s what I did. She did the mile pretty much on her own.  Last year as a 2-year-old she got better and better every week, but unfortunately, she kind of got a crummy trip on the Night of Champions.  The filly got shuffled back, then got locked-in and then made a break. Everything went wrong for her in the Fox Valley Flan Final.  But she came back in the Violet and raced first over and still won pretty easy. In the start before the Violet, she was a good second to Anna’s Lucky Star (the 2016 Illinois 2-Year-Old Totting Filly of the Year).”

Daisy Luke Duke is out of the Flacco Family Farms broodmare Daisy Lee Duke, a daughter of the National Hall of Famer Mack Lobell, making her a full sister to Mack’s Golden Band, a former Dirk Simpson trained trotter, still racing at the age of eight, with 37 first place finishes on his list of accomplishments

There’s a strong contingent of trotters taking on Daisy Lou Duke who will be driven by Kyle Husted and it’s headed up by the consistent Indiana invader Energy Bar (Mike Oosting), third or better in 10 of 11 season starts with a trio of victories to earn the 9-5 favorite in my line.

The Mark M’Pool trainee drew off nine days ago at Hoosier Park with a 1:57.1 clocking on a “good” track. It was the 4-year-old mare’s first start on Lasix. Her $25,380 in season earnings is more than her nine rivals tonight have banked this year combined.

Kyle Husted also drives Bands Houdini, another Searle trainee, in the competitive opening leg of the Daryl Busse Series. The ICF 3-year-old filly is one of the likely favorites in the 10th race after winning her season debut in early April in 1:59.3 on an off track at Hoosier, 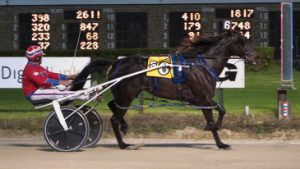 Bury Me Inthesand, driven by his trainer Gary Rath, was an easy winner last night in his leg of the Walter Paisley Series. (Four Footed Photo)

Chalk Player’s Delight: Opening night saw the first legs of two Late Closer Series decided and there weren’t any surprises either in the Walter Paisley or Dave Magee divisions.

In the first Paisley split, the overwhelming 1 to 9 favorite Phyllis Jean (Casey Leonard) held off the pocket pacer Alabanashakey (Mike Oosting) by a neck in 1:54.4. The betting public also had it right in the second division, as the 4-5 choice Burry Me Inthesand (Gary Rath) used a backside move to take command and go on to win comfortably in 1:54.2 over Leenah Pearl (Tyler Shehan).

The post time favorites also prevailed in both divisions of the Dave Magee Series and each did it in front-end fashion. Rousey Ronda, driven by Ridge Warren ($4.40), was almost two lengths better than the 30-1 longshot C Far (Gary Rath) in her 1:57.1 mile while Lady’s Party (Casey Leonard) breezed at 1 to 5 odds in 1:56.4.