Homepage
You are here: Home1 / Mike Paradise2 / Will “The Boomer” Thunder Past Again?

When Skyway Boomer made his Illinois debut last weekend the 7-year-old gelding was pretty much passed over by Hawthorne players in a $12,000 Open Pace when he popped at 18-1 odds

Don’t expect the betting public to do the same the second time around. Not after they watched the Kim Roth trainee come storming home with a very in a quick 26.1 last quarter for Berwyn, Illinois owner Al Beals and return a handsome $39.80 mutuel. 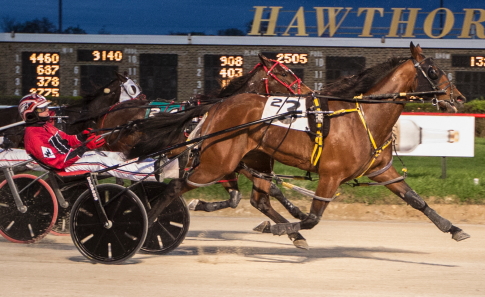 Despite Skyway Boomer’s impressive Illinois debut the horse is the fourth choice in the Hawthornne morning line at 9-2, behind Fox Valley Gemini (2-1), Feelnlikearockstar (5-2) and Royale Rose (7-2)

Skyway Bomber was a $20,000 claim for Al Beals by former Illinois trainer Rick Dane Jr on March 26 and the Sportswriter gelding quickly picked up $6,000 of that amount back last week.

What’s interesting is that Dane claimed Skyway Boomer twice last year when the horse raced mostly in Pennsylvania. Rick took him for $20,000 on August 4 and lost him at the claiming box a week later. In mid-September Dane took him back with a $30,000 price tag. Two months later Skyway Boomer was claimed again and went elsewhere.

In fact, changing barns might be one thing “The Boomer” might have gotten used too. Unraced at two, in his other four and one-half seasons of racing the pacer has changed hands fifteen different times.

In his first three racing seasons Skyway Boomer competed on seven different tracks in Canada. Last year he vied on two Pennsylvania tracks, in Indiana, in Ohio and on a pair of upstate New York tracks. This year his first 13 starts all came on Yonker’s half-miler in New York City.

She’s Back: Louzotic, the 2018 Illinois Two-Year-Old Trotting Filly of the Year, will make her pari-mutuel sophomore debut in tonight’s fifth race. She’ll be driven by her trainer Steve Searle for owners Flacco Family Farms of Alexis, Illinois.