Homepage
You are here: Home1 / Mike Paradise2 / You Never Know What Can Happen in a Race

One of the great things about horse racing is its unpredictably. You just never know what’s going to happen in a race and a perfect example was last week’s second leg of the Mike Paradise Late Closer Series.

I had the winner Fox Valley Sinful buried in my line. He was a non-threating fourth in the first leg, his first race since last June, only his second career start and he drew the outside 10-hole in an 11-horse field.

The pacer didn’t figure to leave from the 10-slot with several horses inside of him likely doing so (and he didn’t). Coming from 10th or 11th to win it all also didn’t seem in the cards so I wrote him off as a contender.

Most of the Hawthorne horseplayers saw it the same way as I did and that’s why Fox Valley Sinful went off at 70-1 odds and when the 3-year-old filly was a far back tenth heading in to the last turn and some ten lengths off the leader, it seemed most of us were right. . . except we weren’t.

Instead the Sportsmaster filly came on like gangbusters in the lane for driver Kyle Wilfong and nipped the betting favorite Sports Analyst in the final strides of a 1:55.3 mile to the delight of some longshot players who got a generous $142.20 return on their two dollar winning ticket.

I asked his trainer Joel Smith if he was as surprised as I was with Fox Valley Sinful’s victory. 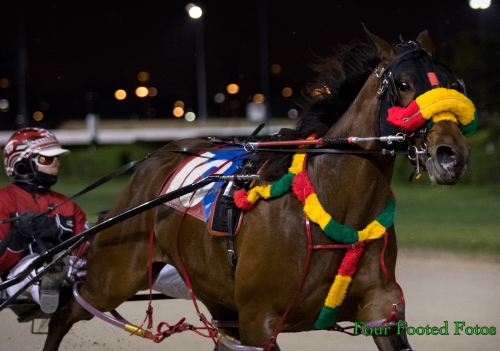 The Joel Smith Stable’s Fox Valley Sinful was all dressed up and on the go when he powered past to win s series le fog the Mike Paradise with driver Kyle Wilfong at 70-1 odds. (Four Footed Fotos)

“No not really,” replied the veteran Indiana based horseman. “The horse trained well all winter the winter. He hadn’t been out in a long time (about 10 months) so I told Kyle to race him easy in his first start and get the horse around the track safely which he did.

“The horse was very immature as a 2-year-old. He was sore and he couldn’t go so we quit with him. I gave him all the time off he needed to get ready for the Hawthorne.

“I didn’t like drawing the 10-hole at all,” continued Joel. ”I told Kyle he could leave with the horse if he thought he could get him up closer but it seemed like everybody left so Kyle had to take the horse back.

“I had some very good years with his sisters and I was impressed with last week’s win He really raced well.”

Those “sisters” are the past ICF champions Fox Valley Touche and Fox Valley Amanda, so the breeding is there for the possibility that Fox Valley Sinful might also develop into another top-notch state-bred pacer for his owners Paula Smith (Anderson, Indiana), James Runyan (Lake Villa, Illinois) and Lynwood Romano of Delaware.

Fox Valley Sinful is the eighth foal of the Cole Muffler broodmare Thongundrcolrsoops, and two of her daughters were major ICF stake for the Joel Smith Stable. Sinful’s full sister Fox Valley Touche (Dale Hiteman) was the 2010 winner of the $218,000 Filly Orange and Blue Final on Super Night.

A few years later Smith had Fox Valley Amanda, a daughter of Yankee Skyscraper out of the same dam as “Sinful” and “Touche” and was the runner-up on Super Night 2013 at Balmoral in the $200,000 O&B filly championship. As a 3-year-old Fox Valley Amanda annexed the $89,000 Maywood Filly Pace Final, again with Dale Hiteman. She retired as a race horse with a mark of 1:53.3 and earnings of over $200,000. 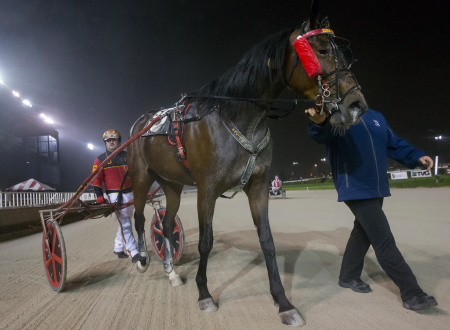 The draw went much better for Fox Valley Sinful in Saturday’s $12,200 Paradise final when he landed the four post in the 10-horse field. The Kim Hamilton trained 3-year-old is listed the 3-1 second program choice behind first series leg winner Special Sauce, the early 5-2 favorite with his new driver Casey Leonard.

The Jamaica Patton Stable’s Sports Analyst, another first round winner, is next at 4-1 from the 9-slot.

The $13,600 Bob Larry series final will go two races later as the ninth event on the card and it has had four different winners in the first two legs, Beach Shootingstar (Jamaica Patton) and Sagebrush Shocker (Casey Leonard) first round victors while You’remyheartrob (Kyle Wilfong) and Et Tu Brute (Robert Smolin) came out on top last week.

Friday’s Series Wrap-Up: Walk On Water Racing’s Princess Oshie ($8.40) came up with a gutsy winning performance in last night’s $12,200 Walter Paisley Final. The 4-year-old ICF mare, driven by her trainer Richard S Finn, raced first-over soon after the first quarter pole and still had a quick 27 flat last quarter in her to prevail in 1:55.4.

C Far gave Princess Oshie all she could handle before settling for second, beaten one length while the 70-1 pacesetting longshot Beamer N Bud (Ryan Anderson) ended up third.

Earlier Ryan’s Mistress completed a sweep of the Dave Magee series with driver Juan Franco and again came from far behind to do it. The Roshun Trigg trained 3-year-old ICF filly was eighth and last at the half but stormed past the field in the lane and drew off for owners Flacco Family Farms of Alexis, Illinois.

Both of the trotting Late Closer series showdowns resulted in upsets. 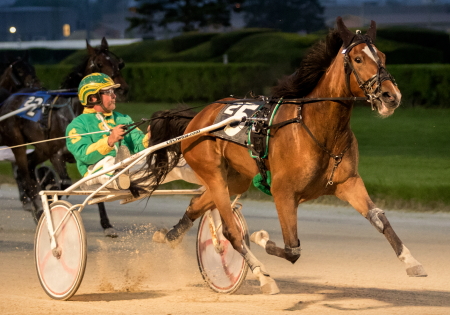 The 10-1 longshot White Pants Fever ($22.20) was given a patient drive in the Bea Barber by his trainer Steve Searle racing in third as Totally Pazzazzed and Lous Silver Star battled each other throughout in the 1:56 mile.

Searle swung White Pants Fever out for the stretch drive and the Lou’s Legacy filly rolled past in the middle of the track for her third win in four season starts for owners Flacco Family Farms and Steve Searle (Grant Park, Illinois),

An even bigger surprise occurred a couple of races later in the Daryl Busse when Sunny Sasha popped at 19-1 odds for Brownstown, Illinois owner Chares Doehring.

The front-stepping Broadway Mojo (Isaac Love) kept the heavy 3-5 favorite Never Say That (Kyle Wilfong) parked out much of the way in the 1:57.4 mile while driver Jared Finn had Sunny Sasha right behind the leaders waiting for the stretch drive.