Homepage
You are here: Home1 / Mike Paradise2 / Younger Brother Takes Over for “Picky”

Months ago when Hawthorne announced its 2019 harness racing stakes schedule, many of us expected that when the Night of Champions came about in mid-September the Plesac stake would be a confrontation between Illinois Trotting Queen Anna’s Lucky Star and the ICF Trotting King Picky Picky Valor.

Sadly, less than a month into the meeting that anticipated showdown wasn’t possible. Picky Picky Valor got violently ill after his May 25th race and died shortly after.

The horse’s untimely death at the age of five hit the horse’s trainer Gerald Hansen and owner Shelley Steele hard. 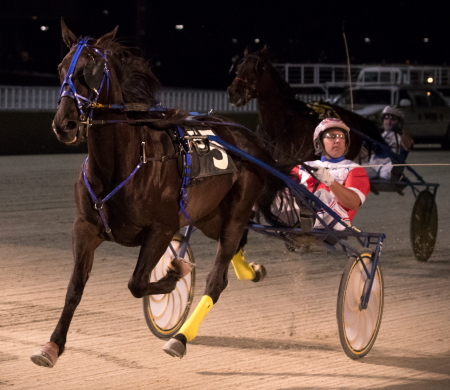 Picky Picky Valor (Casey Leonard), was an eight-time in 2018 when he banked over $71,000 for Monee, Illinois owner Shelley Steele. (Four Footed Fotos)

“Shelley was very upset by the news of “Picky’s” death,” said Hansen who by the sound of his voice was very much distraught by it as well. “Picky” was my buddy. I would go out on the field and he would play with me. He was a great horse to be around. I miss him.”

Almost four months have passed since and a $20,000 prep race for the Plesac will be contested Thursday night ahead of next Saturday’s $45,000 Final on Hawthorne’s Night of Champions.

Only four older ICF trotters will take on Anna’s Lucky Star and perhaps it is only fitting one of those is the Hansen stable’s Talk About Valor, a four-year-old, also owned by Shelley Steele of Monee, Illinois.

Talk About Valor is a full brother of Picky Picky Valor. Both were sired by Yankee Valor and are out of the successful broodmare Heather Doreen. She also had Talk About Cowboys (1:53.3, $229,182), an Indiana sire trotter, making him a half-brother to “Picky” and Talk About Valor.

Going into this season Talk About Valor was a longshot, at best, to be a threat in the Plesac, but that all changed this summer. We’ll let Hansen fill you in on the details:

“When Talk About Valor was a three-year-old he got a fracture of his cannon bone in a freak stall accident, so that put him way behind the other horses in his division. The horse didn’t qualify until early August and only made about a dozen starts last year. He did okay as a 3-year-old ($17, 264 in earnings), but it wasn’t until the horse raced a few times as a four year-old that he really began to come around. The horse’s improvement coincided with the death of his brother. It was like he knew “Picky” was gone. From that time on Talk About Valor has just gotten a little better with every start.”

Talk About Valor has risen this summer from the non-winners of two races lifetime ranks, to an Open Trot starter and hasn’t been worse than third all year, a consistency his older brother also possessed. Last year “Picky” finished one, two or three in 22 of his 24 trips to the starting gate earning over $71,000 and taking a mark of 1:54 flat. 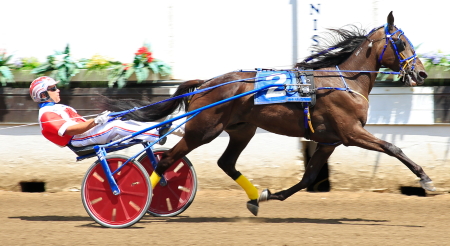 Thus far, Talk About Valor has lowered his lifetime mark this season to 1:55.1, but Hansen won’t rule out that the trotter won’t eventually surpass his older brother’s lifetime best mile.

“Will he go faster than Picky? I don’t know, but like I said he just keeps getting better.”, stated Hansen.

While the remaining starters, Majistic Caprice (Robert Smolin), Primed N Powerful (Jamaica Patton) and Fox Valley Strpwr (Ridge Warren), are longshots, their owners will come out ahead no matter where their horse finishes tonight and on the Night of Champions.