My memory isn’t what it used to be but I can’t recall it happening. Maybe they did, I’m not sure. What I am sure of is that a field of eight pacers who raced with a $10,000 tag a few weeks ago is going for the same purse Friday night at Hawthorne that the Preferred Pace is this weekend at The Meadowlands.

A look at Hawthorne’s eighth race Friday feature shows an evenly-matched field. There really isn’t a stick-out, and you can make a case for a number of horses to come away with the $10,000 winner’s share of the pot.

The final outcome should come down to the trip. That’s been the case in the first two legs of the Cicero Winter Claiming Series. 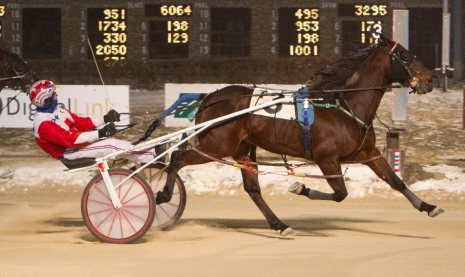 The 11-year-old veteran Mobile Big John (pp 7, Kyle Wilfong) has used up-close journeys to nail down back-to-back victories, both for trainer Loralee Johnson. However, the horse was claimed for $12,500 last week and now races for the red-hot Payton Ode Stable.

Loralee still has a major threat in the finale with Buff’s Image (pp 4, Brandon Bates), an easy front-end winner a week ago after being overtaken in the late going in the first leg by Elite Awards

Speaking of Elite Awards (pp 1, Sam Widger), Lady Luck has been on his side as far as the draw for posts has gone in the series. Tonight is the third consecutive time the pacer has landed the rail, where another journey on or near the front is likely. The 7-year-old gelding was claimed for $10,000 in leg one by trainer Perry Smith.

Then there’s KC Rambuctious Boy (pp 2, Ridge Warren) and he’s been best at Hawthorne. He was also a first round claim by Ronnie Roberts who had the 5-year-old gelding last summer at Hawthorne when he was winning with regularity (nine times), mostly on the front-end.

Billabong Beach (pp 5, Travis Seekman) comes off a second place finish behind Buff’s Image last week. The Steve Searle Stable’s Smoke Rings (pp 6, Mike Oosting) took his 2017 mark of 1:53.2 at Hawthorne and boasts a 1:50.1 mile two years earlier at Hoosier Park, the fastest of any pacer in the field.

Spendabuckonme (pp 8, TBA) from the barn of trainer Frank Petrelli, got shuffled back last week when he ended up third in his second leg. 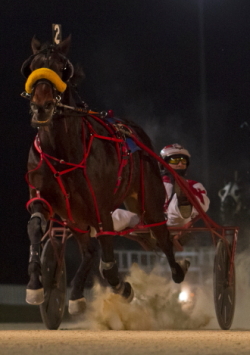 The Open is Open: Also on tap Friday is the $7,200 Open III Pace, another take-your-pick event. Back from Ohio is Sawgrass Farm’s Best Man Hanover (pp1, Tod Warren), a four length winner of this event two weeks ago.

Firedrake (pp 2, Kyle Wilfong), the second place pacer that night as the heavy 1 to 2 public’s choice, is looking for revenge. So is Soap Suds (pp 6, Keith Crawford), the early pacesetter who settle for third.

Trainer Tom Simmons has two classy pacers in the third race co-feature with Somestarsomewhere (pp3, Sam Widger) and Aimo Hanover (pp 4, Mike Oosting). Both pacers have sub 1:50 miles on their list of achievements and between them have career earnings of over $635,000. They were scratched on January 6 because bad weather prevented their shipping in from the Springfield, IL area.

New to the Open III is Alwysbreakinhearts (pp 5, Brandon Bates), owned by his trainer Mike Brown. The 7-year-old gelding popped at 52-1 on the January 6th card in a high-end conditioned pace and was a close second a week ago at the same level.

How open is the Open? So open according to the USTA computer generated morning line that it has Firedrake at 2-1, Soap Suns at 12-1 and the other four starters ALL at odds of 4-1.

When was the last time you saw four pacers in a six-horse race all programmed as the 4-1 second choice?