Homepage
You are here: Home1 / Mike Paradise2 / Distaff and Trot Opens on Tap 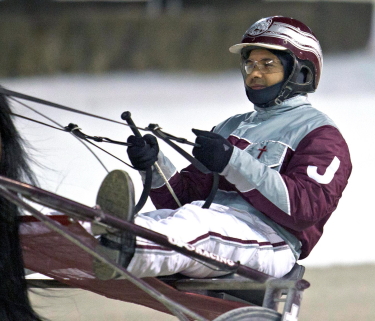 Guatemala native Juan Franco will be back at the lines of the Hosea Williams’ mare Rollin Coal in tonight’s $13,700 Open Pace for fillies and mares (Four Footed Fotos)

Back on January 29th I wrote that this year’s Open Pace for fillies and mares “isn’t likely to have the same dominance that we had in 2021” when Maggie Rhee from the Todd Warren stable won 7 of the 10 Opens and was second in the three others.

So far you have to say your author was spot-on with that forecast.

We’ve raced seven distaff Opens at Hawthorne in 2022 and six different mares have won the top $13,700 overnight event for fillies and mares.

Only DC Batgirl, from the Brittany Dillon Stable has won the event twice and she hasn’t been out since the last Saturday in January.

On our first weekend of the winter meet DC Batgirl prevailed. A week later her stable-mate Vel Donna finished first. On January 22, DC Batgirl returned to the winner’s circle with driver Mike Oosting.

The final event in January saw Seventimesacharm make a successful Hawthorne debut. One-week later Maggie Rhee made her season bow and, you guessed it, won the Open.

However, the last two weeks have the winning Open horses pop at double-digit prices. Hosea Williams Rollin Coal proved best at $28.20 and last week It’s Time For Fun, the third choice in the race, “wired” the field for trainer Nicole Agosti.

That takes us to tonight’s headliner.

Four of the meet’s previous Open mares will duke it out in the $13,700 fourth race co-feature: Rollin Coal (Juan Franco), It’s Time For Fun (Kyle Wilfong), Maggie Rhee (Todd Warren) and Seventimesacharm (John DeLong), with posts 5, 6, 7 and 8, in that order.

Maggie Rhee took the last two weeks off after coming up short at 10 cents to the dollar with a third-place finish when she was the casualty of a wide mile.

I expect her to be the post time favorite.

Sharing the Spotlight: The distaff open will have to share tonight’s spotlight with the return of the circuit’s $13,000 Open Trot. The second race co-headliner has a six-horse field that got a big addition with the return of Talk About Valor, the 2021 Illinois Aged Male Trotter of the Year and a two-time Hawthorne Open winner in January.

Not surprisingly, the star of the Gerald Hansen Stable was assigned the outside six-slot by the Hawthorne Race Office. Starting inside of Talk About Valor is Rockyroad Aldo (Mike Oosting), allocated the seven post after a high level conditioned trot triumph last weekend.

Hawthorne’s fickle USTA computer morning line has Rockyroad Aldo as the 9-5 first flash favorite despite the geldings two fifth place finishes behind Talk About Valor (the 3-1 second choice) back in January.

Notably absent in tonight’s trot feature are Double A Goldrush and Burrow, the last two Hawthorne Open trot victors, and Simply Swan, a two-time Open winner back in January.