Who would have thought an ICF pacer without $10,000 in earnings at the end of his or her freshman season would be racing for a $25,000 pot on the Chicago circuit in the middle of February?

“I never thought my filly would be going for this kind of money at this time of the year,” said the 53-year-old native of Tuscola, Illinois now based in the Springfield (Sherman) area.

Like every trainer and owner in with a finalist in the Doc Walker and Terry Hunt Late Closer Finals Rodney are all smiles with the big purses on the line tonight.

As I pointed out in Friday’s story column, the Terry Hunt finale for ICF colts and geldings is definitely one of those take-your-pick events. On the other hand Doc Walker Late final for fillies certainly tilts toward Fox Valley Catwalk’s after prep events the past two weeks.

Just as she was in the first Walker prep on January 21, Fox Valley Catwalk was again a comfortable winner for driver Tim Curtin last weekend prep.

Like so many horses in their freshman season, Fox Valley Catwalk had some growing up to do and not just in stature. She also needed some better racing luck that she lacked at times as a freshman.

It appears both of those issues have changed for her second season.

The Sportsmaster filly posted only a single victory in nine tries and put a modest $8,558 on her card in 2017. As a sophomore she’ll carry a three race winning streak into tonight’s co-feature with $11,500 banked and the likely favorite to take home the purse’s $12,500 winner’s share.

“My filly got locked in at Springfield and she had the second tier in her last start of the year and didn’t have much of a chance that night. There were also times last she over-paced herself. She had some maturing to do and she’s gotten good at the right time with that nice purse coming up Saturday

Tim Curtin drove Fox Valley Catwalk in most of her 2-year-old starts and he has been at her lines in all five outings this year. “Tim gets along real good with the filly,” said Freese.

The fifth race Walker finale is the first of two ICF Late Closers on the card with a $25,000 purse. The wide-open Terry Hunt will go as the seventh race with division winners Frontier Frank (Mike Oosting), Sagebrush Shocker (Brandon bates) and Sumpun Great (Casey Leonard) all likely getting plenty of the public’s wagering dollars.

They’ll be tested by Brooklynite (Todd Warren) and Kelly D (Mike Rodgers) from posts 1 and 2, respectively.

Sandwiched in between the $25,000 series champions is the $10,000 Open Trot where Larry Lee Smith’s 7-year-old mare Skyway Jaylo guns for her third consecutive victory when she leaves from the outside six slot. 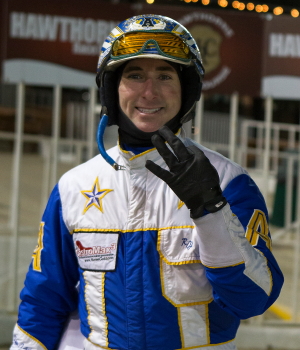 No. 3,000 for Ryan: Congratulations go out driver Ryan Anderson who brought home his 3,000th career winner last night with Olivia V in the sixth race.

Under the tutelage of his father Joe, the California native began driving in 1999 at the age of 19 and one year later as a 20-year-old became the youngest driver ever to win a Breeders Crown Final when he steered Popcorn Penny to the 3-year-year filly championship.
In 2001 Ryan became the youngest to guide a Maywood Park Windy City Pace champion with the ICF pacer Rattle and Rock. In 2007 the now 37-year-old Anderson was Maywood Park’s leading driver.

Huge Required Payout: Hawthorne’s Jackpot High 5 will have a mandatory payout Saturday night. The High 5 carryover has grown to $204,195 going into tonight and will be paid out on the ninth and final race on the program.