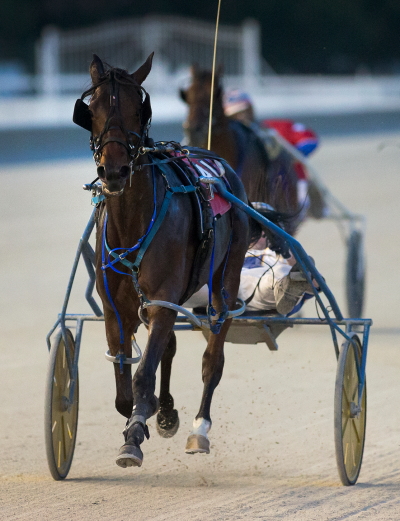 Yankee Joanie (Ryan Anderson) made it three in a row for trainer Herman Wheeler when she won Saturday’s first division of the Incredible Tillie series for 2-year-old ICF pacing fillies. (Four Footed Fotos)

You can draw a circle around the names Yankee Joanie and Fox Valley Halsey after those two ICF freshman pacing fillies came through Saturday night with victories in their respective $12,500 first round Incredible Tillie legs.

Their first place finishes earned the winning fillies 50 series points that provided a huge move in the right direction to gain the $100,000 (est.) final of the Incredible Tillie on Hawthorne’s Night of Champions in September.

Yankee Joanie (Ryan Anderson) was hammered down to 1-9 and she justified her overwhelming support in the fourth race first “Tillie” division, crushing her seven foes for her third consecutive win without a loss.

Trained by Herman Wheeler for Tennessee owner Milton Greer, Yankee Joanie sprinted out from the one-slot into a quick lead and Ryan Anderson was able to coast her to a 30.1 first quarter. There were no early challengers so the prohibitive favorite paced effortlessly to a 59.4 first half with Fox Valley Hotcake in the two-hole.

At the eighth pole Anderson asked Yankee Joanie ($2.10) for another gear and she responded and steadily pulled away from the field, ending up almost a half-dozen lengths ahead at the end of a 1:57.3 mile. Fox Valley Hotcake (Juan Franco) finished second while Grace Ann (Grace Ann) was third best.

Fox Valley Halsey ($10.00) had to work harder to come out on top in the second Incredible Tillie division and a heady drive by Casey Leonard had a lot to do with her 1:56.1 winning mile.

Casey urged Fox Valley Halsey away from the six-post and the Nelson Willis trainee was parked out most of the 29.3 first panel getting command. Tim Curtin took Fox Valley Lil Kim out of fourth on the backside and went after the pacesetter.

Casey kept Fox Valley Halsey on the lead and Fox Valley Lil Kim parked-out when the two youngsters raced side-by side through the third quarter. All the while the pair had Winter Gram (Ridge Warren) locked-in behind them the length of the stretch. Fox Valley Halsey went on to get her maiden win by one length over a fast closing first time starter Fox Valley Torrid (Juan Franco).

The third place filly Winter Gram was disqualified by the stewards to fourth for stretch interference to Fox Valley Lil Kim, who was awarded third. 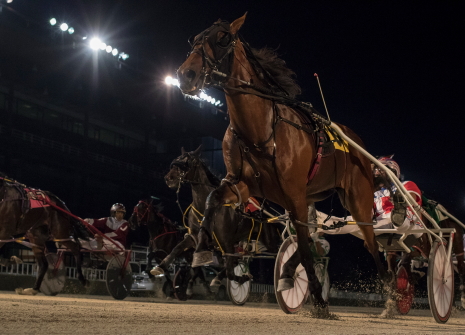 Shrewd Move: The first race $15,000 IC F Open for male pacers saw He Gone Jack ($5.80) pick-up his fifth season win of the year at Hawthorne but this one didn’t come in the 5-year-old gelding’s usual come-from-behind fashion.

Instead driver Tim Curtin pulled He Gone Jack out of third in the first turn and took over the lead following a 28.1 first quarter. After getting away with a soft 29.1 second panel, He Gone Jack pretty much had this race wrapped up.

He Gone Jack is owned by Hugh Lake and Susan Lacey of Joplin, Missouri.

In Imposing Style: The $15,000 ICF Open for fillies and mares saw Bucklegirl Bobette pace to a new lifetime mark of 1:50.2 and she did it in dominating fashion, pulling away by four lengths ahead of runner-up Char N Marg. The 5-year-old winning mare shaved almost two seconds off her previous best time.

Trained by Rob Rittof, Bucklegirl Bobette was Ryan Anderson’s third winner on the night. The winning Duneside Perch mare is owned by Illinoisans Robert and Charles Walker, and Robin Klinger, all of Carrollton, along with Hart Walker of Jerseyville.