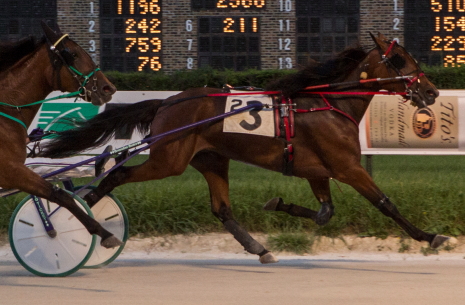 Hawthorne isn’t the only racetrack in Illinois to offer parii-mutuel wagering on its card Sunday.

This afternoon Mount Sterling wraps up its County Fair meet with five Illinois Stallion Stakes for ICF 2-year-olds and you’ll find a number of our top freshman going to the gate at the track located about 250 miles south east of the Windy City.

Post time is 2 pm and with some nice ICF stake purses on the line horsemen like Sam Widger, Kyle Husted, Ridge Warren, Steve Searle, Mike Brink, and Ronnie Gillespie will be on hand to the driving.

The first of two $6,056 ISS divisions for freshmen male trotters are next. The third race second division pits Cardinal stake champions Fitchey For Fun and Fox Valley Quest against each other.

The $11,112 two-year-old filly pace has a five horse field consisting of Lockin On It,Dancin Eyes, Sign Her Up, Jimmy’s Girl and TE’s Smoothas Silk. The same purse is offered on for juvenile colt and gelding pacer Abe Lincoln where Western Perch, Roman Ryan. Patton Plus, Sassy Lil Thing and Ole Slot Machine will slug it out.

Earlier in the week a number of familiar 3-year-old ICF trotters and pacers competed in Abe Lincoln events at the Charleston State Fair. The $7,225 saw the sophomore filly trotter Puddin Cheeks win in a romp (17 lengths), Foolishlittlegirl breeze by six lengths in the $7,625 Lincoln for filly pacers, Trixie Turbo much the best in the $7,425 second season male trot, and Frontier Muffler besting Ryan Racketeer in the $7,725 cold and gelding pace.

Time for Springfield: Next up for most of the top-notch ICF two and three-year-old pacers are trotters is the Springfield State Fair meet. Entries for Friday’s opening day card will be taken Tuesday morning at Hawthorne. Entries close at 10 am for all four Illinois State Fair Colt Stakes eliminations and also for the three-year-old colt and filly trots.

If any class doesn’t split, a prep race for that class will be raced and a horse must compete in the prep race to be in the championship. Entries will also be taken Tuesday morning at Hawthorne for next Saturday’s Springfield program.

Rocking On By: Rockin N Runnin (Casey Leonard) made a dazzling return to Hawthorne last night with a convincing victory in Saturday’s $12,000 filly and mare Open Pace. The Terry Leonard trained four-year-old mare was 5 and 1/2 lengths the best with a 1:50.3 mile, just two ticks off the Hawthorne track record for pacing mares.

It’s Time For Fun got up for second over the pace-setting mare Sweetshadyshark (Ryan Anderson) who took the field to a 55.4 half and still had command at the three-quarters, reached in 1:23.3, before the 1 to 5 prohibitive favorite Rockin N Runnin swept past for her fifth win in 10 season starts.

Rockin N Runnin is owned by Dandy Farms Racing of Glenview, IL Gregory Samples of Indianapolis and Rachel Leonard of Anderson, IN