We could see a rare major change on the placement of Chicago circuit harness races for Hawthorne’s summer meet.

As far back as I can remember all Illinois harness tracks have carded its top class open races on a Saturday, and for a good reason. That’s when a racetrack drew its largest onsite crowd, producing its highest mutuel handle.

However a lot has changed in our industry through the years.

It’s evident the racetracks with the influx of Casino monies can offer much better purses to land the top-notch horses from some of the better stables. 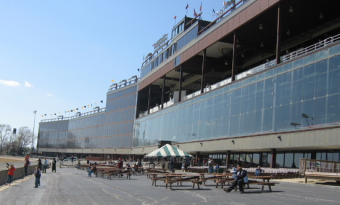 Knocking heads nation-wide every Saturday night against racetracks with two and three times the purse money on top-notch races makes it an arduous task to get some of the better open horses to compete here in Illinois.

And it’s been that way for many for years

That’s why Hawthorne iwill move its Invites, Opens and high-level conditioned races to Sundays and make that its “class night.”

“By switching those races to Sundays we don’t have to go against the big boys around the rest of the country,” said Tom Kelley, Hawthorne’s Director of Harness Racing Operations. “Hopefully this way we could catch some of the better horses that may not have gotten in at Hoosier and Scioto etc. on a Friday night or Saturday night.

“There are only a few tracks that race on Sundays and with a classy card we should get most of the attention from the horse racing bettor and have good-size pools on our Sunday night races, producing seven-figure total handles on a regular basis.

“I’ve talked to some trainers who race in Indiana and Ohio and they’ve told me that if some of their good horses don’t get in there and we offer a nice purse they would ship to Chicago for a Sunday race.”

I like the concept. It’s a bit of a gamble but if it doesn’t work Hawthorne can always switch back to the old way of writing their condition sheet.

The Saturday cards should do just fine even with most of the classier races shifting to Sundays. Much of the Hawthorne’s stake races will be raced on Saturdays along with some of the Late Closer Series and the mid-level claiming and conditioned races.

Balmoral Park handled very well on Sundays with the scant competition and most of the time with low-end races and diminutive purses.

The beefing-up of Hawthorne’s Sunday cards is expected to begin on May 15. There is no live racing this Sunday evening at the Stickney, IL racetrack.

Hawthorne Notes: The first of Hawthorne’s regular Wednesday qualifiers are scheduled this morning beginning at 11 o’clock. Qualifiers will also be held this week on Saturday morning. Trainers should enter their horses by 10 am on Friday.

Qualifying time for a pacer is 2:03 and 2:05 for a trotter. Two-year-olds are allowed two seconds and three-year-olds one second.