Homepage
You are here: Home1 / Mike Paradise2 / A Big Smile Can Say It All

The day after Jamaica Patton drove the 58-1 longshot to her huge upset win in an opening round division of the Plum Peachy Stake Series, I called the Mississippi native and asked him if he still had that big smile on his face that he did in the Hawthorne winner’s circle last Friday’s night?

“I sure do,” was Jamaica’s reply with a laugh.

And why wouldn’t the 36- year-old? After all, most of us didn’t give Jamaica and his winning ICF pacer Filly Forty much of a chance in the first division of the 3-year-old Plum Peachy.

Yes, Filly Forty had the rail in the 11-horse field, but she was a non-threat in her first two season starts and she ended her freshman campaign with an eighth place finish in the Violet, distanced at Du Quoin, and in between didn’t make the Incredible Tillie Final on the Night of Champions. 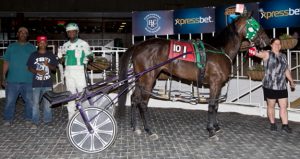 Nevertheless as we’ve said many times in the past, that’s why they race. Upsets do happen and Jamaica has pulled off his share of surprise winners through the years.

Not only did Filly Forty capture her Plum Peachy division, she did it by almost seven lengths and the Dossie Minor trained filly won in 1:53.3, knocking a full four seconds of her best winning mile as a 2-year-old.

What turned Filly Forty around?

“Mostly it was her attitude and the very good trip that we got,” answered Jamaica.  Last year she had some attitude problems. Dossie (trainer Minor) has been working hard with her to try and get her a better attitude and she did have the right attitude in Friday’s race.  I have to admit I was surprised at her time. She had been going in 55, but she stepped it up in that race, but she did get the trip.  I knew my filly can leave pretty good and I was hoping to get her out there and be one or two when Casey (Leonard) was probably going to move his filly (Lady’s Party) on the backside. Casey was driving a sharp filly and I knew he would be right on my back when we got out of there.  I was hoping to be in the pocket or the three-hole when Casey’s horse took over the lead and sometimes it turns out just the way you hope it would. I thought if we were up close and my filly might be covered up until the last turn and that’s the way it turned out.  I took her out of the three-hole in the last turn because I didn’t want to take any chances on getting locked in and she just went on from there.”

I told Jamaica it seems that every time I do an interview with him it’s after he drives a longshot winner in a significant race.

“I’m out there to win just like everyone else,” said Patton with a chuckle.

In 2016 horses Jamaica drove were third or better in 136 of 244 starts, 69 of them winners. He ended up with an excellent UDRS (Universal Driver Rating System) of .413. On a national level only one driver who piloted between 200 and 299 starters had a higher UDRS than Jamaica.

ICF Freshmen Debut: The initial races for 2-year-olds will go postward in tonight’s Daily Double. Thursday’s first event is for freshman fillies and the second for pacing colts and geldings.

All eight filly races in race one are eligible for the Incredible Tillie ICF freshman stake series that gets under way with round one on Friday, June 16th.

Seven of the eight state-bred pacing colts and geldings in race two have been nominated to the Incredible Finale stake series that begins a night later on Saturday June 17th. The lone exception is the No. 8 horse M T Gunslinger.