Homepage
You are here: Home1 / Mike Paradise2 / A Big Win for a “Little Guy”

Most of us who don’t have a wagering interest in a horse race tend to root for a “little guy,” a trainer with a small stable that doesn’t usually doesn’t have the betting favorite in a big race and has never had a horse who won a six-figure event.

When Captain Rhett exploded in the lane on Hawthorne’s Night of Champions with driver Marcus Miller and captured the $180,000 Robert F. Carey Memorial Championship for the 3-year-old ICF colt pace, I’m sure there were plenty of veteran horseman and players, who were happy for trainer Jim Horvath.

The 71-old Horvath has been one of those “little guys” on the Chicago circuit for a number of decades. From time to time Jim has had some good horses, but he never had been in the winner’s circle after a Super Night type of championship. 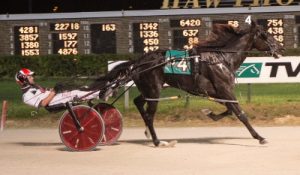 Of course, that all changed on Hawthorne’s 2017 Night of Champions for the Chicago native when his “trip horse” Captain Rhett got the right kind of trip for Illinois owners Harvey Grieff (Odell) and Robert Verdun (Pontiac).

Horvath has certainly paid his dues before this year’s big reward. Jim has been involved in Illinois harness racing for the last 43 years, with some of those racing seasons far from prosperous years for his often small sized Chicago circuit based stable.

Horvath knew he sent out a horse on the Night of Champions with a solid chance to win the Carey Final, but he also understood some things had to go his horse’s way to succeed.

“I told Marcus (driver Miller) before the race, just sit with him. The horse has got a big motor. He’s a ‘trip horse’ and all you have to do is give him a trip. And boy, that’s what happened.”

A fast early pace was expected in the Carey Championship and it turned out to be even quicker than we all imagined when the 10-horse Ima Skydancer shot out and took the field to a startling 54 second flat first half.

Marcus had Captain Rhett in fifth position, some eight lengths back at the bruising half, and looked ready to make his move.

“I was saying to myself don’t pull him yet, not yet,” said Horvath. “Marcus timed it just right.”

Captain Rhett got into high gear near the three-quarters (1:23.1) and his 26.4 last panel gave the Horvath trainee an almost three length victory in 1:50.3.

It was a happy crowd in the Hawthorne’s Winner’s Circle. (Four Footed Fotos)

Marcus was the sixth different driver in Captain Rhett’s 3-year-old campaign. The son of Duneside Perch, out of the Sportsmaster mare Scarlet, had the fastest mile of the year in the state by an ICF pacer with his 1:49.4 clocking in the Springfield championship with Kyle Husted at his lines.

After the horse’s fourth place finish at Du Quoin, a third in a Hawthorne conditioned pace, and a fourth in the fourth leg of the Carey series, Husted made a decision to switch to Slzburgerslzburger for the Carey showdown.

“When that happened I told Harvey (owner Grieff), let me give it a shot and call Marcus and see if he’ll come in from Pennsylvania to drive our horse. He was here (on the Night of Champions) last year and I thought he might come back if he had a good horse to drive in a championship.

“I know Marcus well. He drove a lot for me when he was here (in Illinois). So I made the call.”

“Marcus told me ‘I know the way there’ and that he’ll be at Hawthorne to drive our horse in the championship. I’ve always liked Marcus. He’s a good driver and he’ll listen to what you want done with your horse in a race and go out and do it. I can’t say that for some of the other guys here who hear what you tell them and then let it go in one ear and out the other.”

Horvath became involved in harness racing when the sport was beginning to peak decades ago on the Chicago circuit.

“I started out in the business 1974, with a gentleman named Anthony Gaudio and my first job at a track was with Harry Burright. I went out on my own in 1976 and won my very first start as a horse trainer.”

“I’ve had some nice horses over the years. One of them was Anxious Nate RK who won 16 races for me and made over $100,000. He won his Dan Patch elimination (in 1995 at Sportsman’s), but the horse got locked-in during the final.

“Another good horse for me was Private Ashley. I had her a few years ago (2013). She was third in a Super Night Consolation. But I’ve never had a 3-year-old like Captain Rhett.”

“The Captain” banked $131,229 in his sophomore campaign and is now being pointed for Hawthorne’s upcoming winter meet.

“The horse is in Ohio (Northfield Park) with me, but I’ll be bringing him back to Illinois for Hawthorne. I got calls from Robin (Racing Secretary Schadt) and Tom Kelley (Director of Harness Racing Operations) saying they’ll have some series or stake races coming up in January with good money for Illinois bred horses.”

So are we Jim.