Homepage
You are here: Home1 / Mike Paradise2 / A Fun Finish to the Distaff Open 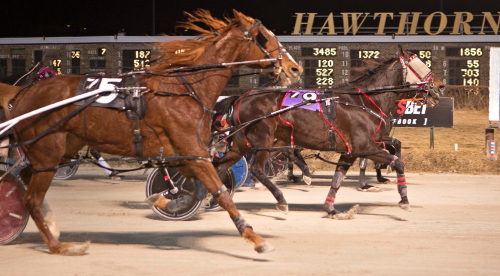 We had to wait for a four-horse photo to be unraveled before it was determined that It’s Time For Fun became the first mare to win Hawthorne’s $13,700 distaff Open for the second time since early in the meet.

Patiently steered by the meet’s leading driver Kyle Wilfong, the Nicole Agosti five-year-old trained homebred came on with a rush from far out of it to take the Saturday’s co-feature by a head over Fox Valley Exploit (Kyle Wilfong).

Rojo Caliente (Casey Leonard) also closed a ton to finish third while the pacesetting Rollin Coal (Juan Franco) was fourth, beaten only by a neck.

The 6-5 favorite Maggie Rhee (Todd Warren) was a non-factor going off stride while racing out of contention.

Unlike her last two starts when she sprinted out from outside posts and dictated the fractions, the 30-year-old Wilfong had It’s Time For Fun in seventh and eighth most of the way after ducking the Mr. Lynn Wilfong owned mare while Juan Franco hustled Rollin Coal out and into command with the early leader My Uptown Girl taking the pocket.

It’s Time for Fun was still seventh, more than eight lengths behind Rollin Coal at the three-quarter pole with a quarter of mile to go on a sloppy racing surface.

The gritty mare then went into high gear, gobbling up ground, and proving best by a head in 1:55.2 for her second Open win in her last three starts and her third of the season after getting blanked in 15 tries last year for her Kentland, Indiana breeder and proprietor.

The fastest finish of the race belonged to the 22-1 longshot Rojo Caliente who was ninth, ten lengths off the pace at the three-quarters and came home in 28.4 in the slop for driver Casey Leonard.

A Magical Ending: Earlier on the card Todd Warren’s Magic Night pulled off a bit of a surprise win in the $13,700 Open Trot over the 2-5 public’s choice Talk About Valor.

Third choice in the betting at odds of 5-1, Warren had Magic Night ($13.00) on a quick lead from the two-slot with Talk About Valor (Travis Seekman) settling in right behind the eight-year-old Kadabra gelding.

Mike Oosting took Rockyroad Aldo out of third and powered to the front as Warren was content to take the hole being the Kim Roth trainee. They stayed that way into the stretch drive where Warren was able to have Magic Night wear down Rockyroad Aldo while holding off Talk About Valor by one and one-half lengths at the end of the1:57.1 mile on the “off” track.

Owned by his driver and trainer along with Illinoisans Richard Leslie Peters, Tomei and Taylor Warren of Georgia, Magic Night, hasn’t missed a check in eight season starts while putting almost $22,000 on his card.