Horsemen and owners of ICF pacers and trotters heading to Springfield to compete in the Illinois State Fair Colt Stakes got some very good news this weekend.

The Illinois Department of Agriculture’s County Fairs and Horseracing Bureau has announced “we’ve received additional spending authority for the purses at Springfield and the Du Quoin State Fairs” and went on to publish significant boosts to purses for the ICF championships.

Also added to the Wednesday Aug. 16 final day program are Illinois State Fair Colt Stake Consolations ranging from $9,000 to $12,000 in purse money if there are sufficient entries to warrant those races.

Because of your IHHA and its team feverishly working behind the scenes for weeks with the Illinois Department of Agriculture, they were able to get the Springfield and Du Quoin stakes increased to more rewarding levels.

A $48,000 purse will be now offered on all the 2-year-old stake finals at Springfield. Each of its 3-year-old colt and filly championships will carry a $44,000 pot.

A reminder to horsemen that entries will be taken at Hawthorne Tuesday morning for Springfield’s Friday and Saturday Springfield programs. A $6,000 purse is on the line for all of the 2 and 3-year-old stake eliminations. If any class doesn’t split a prep race will be written. A horse must race in the prep, or in an elimination race to compete in a championship.

Taking Pride: With the Springfield State Fair race meeting getting under way on Friday afternoon the Hawthorne’s entry box for tonight’s card was lighter than normal.

Nevertheless the Hawthorne Race Office did put together a six-horse Open III Trot that will go has Sunday’s fourth race. The $9,000 feature was drawn by groups with the John D Finn Stable’s Pridecrest assigned the outside six slot while his five challengers drew for posts one through five. 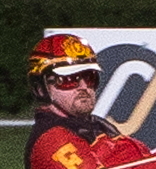 Pridecrest, a five-old son of Angus Hall, will be handled by his regular driver Jared Finn. The 30-year-old resident of Newton, Illinois gave the trotter a very good trip in last week’s Open but the winner Banker Volo was just too tough with his 1:54.4 mile.

Pridecrest trotted a 27.3 last panel to earn a second place check for his Ankeny, Iowa owner Mark Hinshaw and comes into Sunday’s race with over $90,000 on his season card. In contrast, his five foes Sunday have a shade under $70,000 in combined earnings for 2017.

The 11-year-old veteran Celebrity Hercules (Casey Leonard) landed the advantageous rail and the Dandy Farms (Glenview, Illinois) trotter has lifetime earnings of $561,185 and has racked-up 46 victories in his career.

Posts two through five will be manned by Master Of Excuses (Mike Oosting), Big Expense (Kyle Husted), Windsun Galaxie (Jim Lackey) and Held In Balance (Tim Curtin). Pridecrest is listed at 7-5 in the Hawthorne program.

The gelding spent the first five months of this year on the east coast, racing on Yonkers Raceway’s half-mile track for trainer Scott Di Domenico, a native of Skokie, Illinois, in all but one start. The horse was fifth in a $50,000 claiming event at The Meadowlands in mid-May and joining the Finn Racing Stable a few weeks later.