Homepage
You are here: Home1 / Mike Paradise2 / A Past Industry Change to Remember . . . and Regret

For those of us who were involved in Illinois harness racing 26 years ago whether as a player, a horseman, an owner or perhaps as an employee, most will remember one major change in the industry.

And it wasn’t for the better.

Since the track’s barn area bordered Hawthorne’s property on the south and elevated train tracks to the north, the only way to increase its racing surface length was to extend surface outwards to the east, keeping the same tight turns but extending the straightaways. Expanding west wasn’t a possibility because the racetrack’s Clubhouse entrance was about a sidewalk away from a major street (Laramie Ave) complete with its sewer and gas lines, ect.

The track’s enlargement was done for the thoroughbreds that competed there every spring and often in the fall as well. For many in the local thoroughbred industry Sportsman’s Park was known as a “bull-ring” because the runners (sometimes unsuccessfully) had to try and negotiate what amounted to banked half-mile turns. 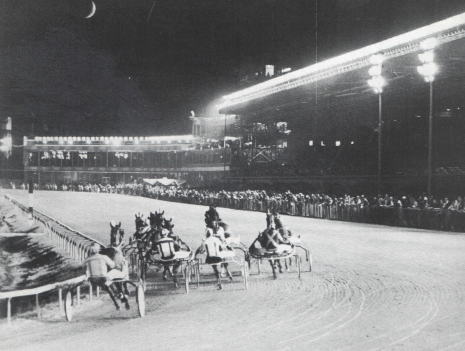 This was the scene of a harness racing field heading into the stretch when Sportsman’s Park was a five-eighths oval prior to 1992.

The bigger track size didn’t eliminate or even marginally facilitate the ability of a thoroughbred horse running full speed to navigate the track’s constricted turns and the number of runners bolting the turn didn’t diminish.

But maybe the lengthening of the straightaways was really done to get the facility ready for the eventual introduction of auto racing to Sportsman’s Park. That would come some seven or so years later at the expense of the Midwest’s premier and most lucrative harness racing meetings for many decades.

As it turned out the bigger track did little to make harness racing a better product for the public’s wagering dollar. It certainly made for a much less entertaining product for the horse player

Sportsman’s Park homestretch as a five-eighths oval was 902 feet. Plenty long enough. (The Meadowlands is 990). The new 1992 Sportsman’s extension increased the length of the stretch to 1,346. That’s 26 feet longer than Hawthorne’s. While a horse had a better chance of shaking loose down Sportsman’s longer stretch its long, long straightaways made for much duller races.

Too often a race came down to a quarter of a mile dash with little, if any, movement once a field settled in. Gone were the two, three or more lead changes before the stretch run. Also gone was much of the up-close view from the outside Grandstand of a race.

You needed a telescope to have any idea where your horse was coming out of the last turn on the bigger track. The track’s primary TV camera didn’t help much. It were located in the same place prior to the track change (near the finish line) and for a long while it could only provide a little more than a head-on view of the horses until they got in front of the Grandstand

Little did we know then that Standardbreds would be charging down that long stretch for only six more summer seasons before getting booted out of the facility and the plop-plop sound of hoof beats would be replaced by deafening roar of car engines. The smell of onions being grilled in the Grandstand concession stands would instead turn to a much more obnoxious, and for that matter unhealthy, odor of gasoline.

After the 1997 harness racing season the Indy type cars moved in and the Standardbreds were shoved out 45 miles further south to Balmoral Park to become the new home of Super Night, the American Nationals, and just about all of Sportsman’s major stake races.

Sportsman’s Park was located just seven miles from Chicago’s “Loop” the same as its former side-by-side neighbor Hawthorne, and was available by public transportation. Not so for Balmoral Park where a full gas tank would have been my recommendation for any Chicagoan who wanted to make the long trek to the boonies.

A few years later it was pretty obvious that the decision by Sportsman’s Park misguided board of directors to go to Indy type racing was likely going to be a financial failure even with their giving away of thousands of free tickets the first couple of years to pump-up the auto racing attendance.

Nevertheless the big-wigs soon after spent a reported $60 million (much of it borrowed) to lay down an asphalt racetrack for auto racing and built an enormous grandstand. However the auto racing attendance kept shrinking and the one-time booming jam-packed horse racing facility for at least eight months of the year, sat there for months at a time as an empty, lonely and cold looking and concrete structure.

Thoroughbred horses tried run on a cushion of dirt spread over the auto racing surface, however horses broke down with often too much regularity. In 2002, Sportsman’s final thoroughbred season, horse racing patrons sat patiently while the track crew spent an hour trying to get the surface ready only to be set back home when those horse races had to be called off.

Sportsman’s Park then became strictly an auto and truck racing facility and was renamed Chicago Motor Speedway at Sportsman Park (now that’s a mouthful and a not-so-catchy title). By then it didn’t matter what you called the place because, as many had predicted, it was going to end up belly-up.

While highly successful harness racing meetings were conducted every year at Sportsman’s Park from 1949 through 1997, a span of 49 years, the boneheaded decision to hold Indy style auto races there only manage a four year run (1999 through 2002).

The facility, and land, was sold to the town of Cicero, Illinois ($18 million) in 2003 and later was teared down. Now days you’ll find giant-size liquor distribution warehouse in its place.

The asinine idea that turned a thriving and money-making horse racing track into an eventual auto racing mausoleum, warranted one local media outlet to call it “one of the worst business decisions in Chicago sports history.”