The first decade of this century was an era of illustrious filly and mare pacers competing in Illinois, especially on the Chicago circuit, and one of the most renowned was Shirley Le Vin’s Parklane Powerful.

In her six year span of racing, from 2001 through 2006, this ultra-consistent daughter of Sportsman’s from the stable of Homer Hochstetler earned almost $800,000 for her Barrington Hills, Illinois owner.

Parklane Powerful finished third or better in 98 of 140 lifetime starts, winning 43 of them, and at one time got so good she had to battle “the boys” to get raced on a regular basis.

As a two-year-old her trainer Homer Hochstetler or Dave Magee drove her in all 12 of her starts when she banked $74,290 and won five times. At three, Parklane Powerful hauled in $115.147 with mostly Hochstetler at her lines with the help of catch-drives from Tim Tetrick, Eric Ledford, Mike Oosting and Sam Widger. 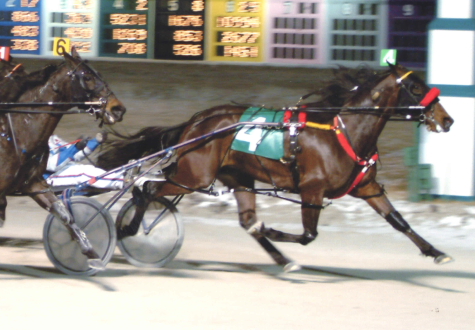 The talented pacing mare took her racing career up to another level at the age of four when Ron Marsh became her regular driver. Parklane Powerful went 2-for-8 in her initial starts in 2003 without Marsh and then put on an amazing streak of from late May through late September with Marsh steering her, often going against some rugged mares as Loyal Opposition, Cinder Best, Giggles The Clown and Oneinamilliongirl.

In 13 consecutive outings, all in either Preferred events, Opens or ICF distaff stakes for fillies and mares, Parklane Powerful finished first or second in e very one of them with Marsh. At one time as a 4-year-old she tallied a five racing winning streak and triumphed four starts in a row another time, including the $100,000 Ann Vonian Championship for older ICF mares on Super Night 2003.

Parklane Powerful’s last eight starts that year came against colts and geldings in Illinois opens and stakes or in open company Free For All events. Yet the Sportsmaster mare, sired by Broadway Treasure, still made 15 different season trips (13 with Marsh) to a winner’s circle and secured over $235,000 in earnings.

She concluded her 2003 campaign winning Maywood Park’s $40,000 Associates against ICF colts and geldings in late November with Marsh.

In 2004 as a five-year-old, Parklane Powerful and Marsh continued to a remarkable tandem on the Chicago circuit. That season they ended up one-two in 19 of 30 starts while the gifted pacing mare added another $206,930 to her card.

In 2005 Hochstetler took Parklane Powerful to the Meadowlands to start off her 6-year-old season. The mare won a $30,000 Conditioned Pace in her third New Jersey start and followed with a victory in a $35,000 leg of the Cape & Cuter series, both with Ledford, before she had some disappointing finishes due to health issues.

She came back to Illinois in late April and proceeded to be first or second in her next six starts in Opens or ICF stakes with Marsh back guiding her. The mare deposited another $115,410 into her purse account as a six-year-old.

Parkland Powerful’s last year as a racehorse was in 2007. The seven-year-old mare went postward 15 times, all in Opens or state-bred stakes and made $47,515 before Hochstetler stopped with her in mid-July.

With her racing nights over Parklane Powerful began a new career as a broodmare with all of her first seven foals making it to the races. Her 3-year-old daughter Satisfashion, by The Panderosa, has been is competing at Hoosier Park.