The gals take over the Hawthorne spotlight on the first Sunday card of this year’s long lengthy meeting. The featured Open Pace for fillies and mares drew a seven-horse field with a pair of Indiana breds—Pretty Image and Dee Rocks—likely to generate a good portion of the seventh race handle.

Casey Leonard will drive the six-year-old mare Pretty Image for the first time and she’s the 2-1 morning favorite. Ridge Warren takes over the lines behind the Jamaica Patton trained five-year-old mare Dee Rocks, listed next at 3-1.

Both mares have spent most of their racing careers competing at Hoosier Park but with the Indiana track dark until March 27th, they’ll most likely stick around here until then.

Dee Rocks did begin her career at Hawthorne in 2017, winning her first three career starts on the Chicago circuit. The Rockin Image mare went on to have had a brilliant 2-year-old campaign for Illinois owners Ron Phillips (Athens) and John Carver (Rock Island), capturing 11 of 14 races and banking a hefty $156,750.

Sunday’s race will be Dee Rock’s first since early November when she competed at the new Kentucky racetrack Oak Grove. The mare did have a 1:56 winning qualifier on Feb. 5 at Hawthorne. 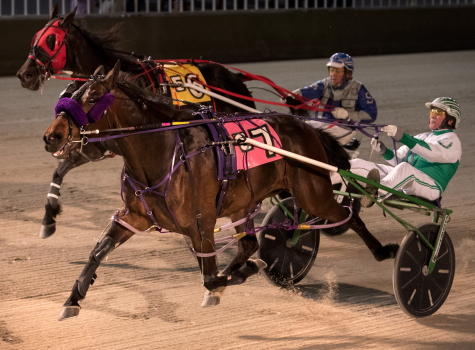 Pretty Image finished her 2019 season for owner and trainer Rodney Freese at Saratoga in upstate New York. “She raced very well there,” said Rodney. The mare’s only disappointing finish in December came in the last race there when she got pushed back by a horse that stopped at the three-quarters.

So if you’re looking at the lines of Pretty Image’s December 12th race, that’s why she only closed in 30.4 and ended up a non-threatening fourth after a pocket trip.

Pretty Image won a qualifier six days ago in a mile time of only 2:04 with Rodney on a Hawthorne track rated “slow” by the stewards and rightly so.

“The track was terrible,” said Rodney. “It was about three inches deep. A lot of horses just couldn’t get a hold of it.”

Except for the 2018 season, Pretty Image hasn’t made many trips to the gate at Hawthorne in her career but when she has, the mare has done very well.

“She likes the track,” said Rodney. “And she likes Hoosier’s too. The one year she did race the summer at Hawthorne she had a very good meet.”

Pretty Image made 13 starts at Hawthorne in 2018, all in Opens, and came up with 2 wins, 5 seconds and 2 thirds. Altogether she’s 6 for 19 on the big mile oval, to go along with five seconds and a pair of third place finishes.

Account Rollover ($14.20) enjoyed a two-hole journey behind the pace-setting Castle Flight while Fox Valley Gemini was fourth through the 55.1 half. Casey had “Gemini” on the move in the last turn, flushing out Account Hanover but fell a neck short of overtaking the Jim Eaton trained winner owned by Robert Silberberg of Farmington Hills, Michigan and Jim Schwarz Jr of Wood Dale, Illinois.

Explosive Debut: A few races earlier in the co-featured $12,000 Open Trot Lindy’s Big Bang, a new addition to the Terry Leonard stable, came flying down the lane to sweep past the co-favorite Pine Dream (Brandon Bates) in the winner’s Hawthorne debut.

Driver Casey Leonard was content to take a two-hole trip with Lindy’s Big Bang ($4.20) behind Pine Dream, who cut fractions of 30.3, 59.2 and 1:28.3. In mid-stretch Casey got the five-year-old Explosive Matter trotter in high gear and the gelding to roll past with a 1:55.4 clocking for Michigan owner Nathan Cockerham and Scott Tyler George.