Homepage
You are here: Home1 / Mike Paradise2 / A Rockin Newcomer to F&M Open

When the $12,000 filly and mare Open Pace comes around tonight you’ll notice a new face in the Saturday feature. While Rockin N Runnin may be novel to the Open she isn’t a newcomer to Hawthorne.

You might remember Rockin N Runnin from the first month of the meeting. After a long absence from racing due to health issues, the 5-year-old mare started her comeback in May posted with a victory in 1:54.2 with tonight’s driver Casey Leonard. She also had a pair of second place finishes before going to Hoosier Park under the care of Casey’s brother Ross

Since then Rockin N Runnin has delivered a trio of wins in her last four outings including a career best mile time of 1:51 flat in mid-July for owners Dandy Farms Racing (Glenview, Illinois), and Indiana residents Gregory Samples (Indianapolis) and Rachel Leonard (Anderson). The trio acquired the mare this past April.

The home bred mare does her best pacing in the late going and Hawthorne’s longer stretch, and her current sharpness, are the principle reasons Rockin N Runnin (post two) will open up as the 6-5 programmed favorite in the fourth race headliner. 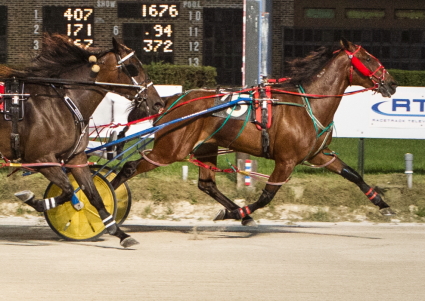 It’s Time for Fun, one of two Brett Wilfong trained mares in the field, is three-for-three at Hawthorne after campaigning earlier this season at Hoosier Park. The home-bred four-year-old mare came up sick and was scratched out of last week’s Open Pace that went to Sweetshadyshark in 1:52 flat.

Sweetshadyshark has a fondness for Hawthorne’s surface and rarely misses a check for trainer Ronnie Roberts. The 5-year-old mare got the job done last week and could be sprinting away again tonight from the starting gate.

Boogie On Down, the other Brett Wilfong trainee, had a three-week stretch at Hawthorne in late June and early July where she rattled off three straight wins with the last two coming in an Open Pace. She’s a capable mare on or off the pace.

Rockin N Runnin was unraced as a two-year-old and had a very solid first campaign at the age of three for trainer Jeff Cullipher. Competing almost exclusively in Indiana sire stakes Rockin N Runnin out over $45,000 on her card in 2017 while notching three wins in 13 trips postward. The filly won a $25,000 ISS elimination race and also a $20,000 Indiana sire consolation stake.

The six-year-old Royal Rose (Travis Seekman) came roaring down the lane (26.2) to capture the fourth race in 152.2 and the five-year-old Royal Big Guy (Lance Scurlock) posted a 1:52.3 win in the seventh event, pacing a 26.3 final panel.