Homepage
You are here: Home1 / Mike Paradise2 / A trio of “Lou Lous” in Open Trot

After having to compete in Indiana in two of his last three starts, the Merv Chupp Stable’s “money making machine” Pine Dream is back on the local scene for Sunday’s $12,000 Open for trotters.

Not unexpectedly, the now nine-year-old veteran was assigned the outside seven-post by the Hawthorne Race Office in the seventh face feature where half of his opposition are Steve Searle trained “Lou Lou’s. Otherwise know has stable-mates Louzotic (Casey Leonard), Lousraptor (Juan Franco) and Louscardamon (Kyle Husted). 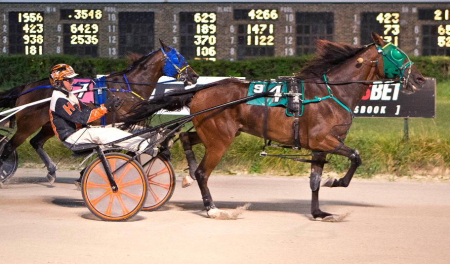 Reign And Shine (pp 1, Jordon Patton), Cash Hit (pp 2, Travis eekman) and Walter White (pp 4, Ridge Warren) are Sunday’s other three Open hopefuls with the latter displaying signs he could be ready for an overdue victory.

The nine-year-old Jim Eaton trained Walter White boasts a career bankroll over more than $550,000 and comes off a pair of game efforts at Hoosier Park. The gelding has showed he can unleash gate speed and that may be the strategy tonight in hopes of ending a nine-race losing streak.

Meanwhile Pine Dream has continued to pad his ever-growing bank account for trainer Merv Chupp. The last time this old-timer missed a purse check was 19 starts ago back in early March, the horse’s last outing in Ohio. Pine Dream’s 2021 earnings are over $57,000 and we’re only in the month of August.

Du Quoin Next Up: With the two-day harness racing meeting at the Du Quoin on tap this upcoming weekend, Illinois trotting queen Annas Lucky Star is skipping tonight’s Hawthorne Open to prepare for the ICF aged mare trotting championship at the southern Illinois facility on the Friday, August 27th card that begins at 7 pm. The Saturday Du Quoin State Fair program has a 12 noon first post.

It was the third consecutive win for the trained mare who Matt Rodriguez (Aurora, Illinois), who shares ownership of the mare with Dylan Niefeldt (Peotone, Illinois).