By Mike Paradise
When veteran Pennsylvania driver Jim Pantaleano steered Dr. Drake Ramoray to his victory in the first Robert F. Carey Memorial stake Saturday night at Hawthorne he most likely did something that hasn’t been accomplished before—winning a five-figure race with ICF pacers on the same day, at two different racetracks, hundreds of miles apart.
Pantaleano drove the now 5-year-old former Super Night champ Unlocked to his 1:51.2 victory in the $20,000 Preferred Pace at The Meadows in western Pennsylvania for the Megan Rogers Stable around 11 am Chicago time Saturday.

Some 10-plus hours later the 54-year-old Ohio native won the first ICF 3-year-old Robert F Carey stake division split for the same Chicago owners with Dr. Drake Ramoray, named after a character played by actor Matt LaBlanc (Joey Tribbiani) on the long-time No. 1 TV comedy show “Friends.”
Norm Parker trains both Unlocked and Dr. Drake Ramoray.
Pantaleano hustled Dr. Drake Ramoray ($5.20) away from the outside 8-slot into the three-hole in the early going but didn’t wait long to seek and get to the front. The Duneside Perch gelding took the field to a 57.3 half and had plenty left for the stretch drive, drawing away to a winning 1:53.4 mile.
Holdonwe’rerolling got up for second, beaten some two-plus lengths by the 8-5 favorite. Chloe’s Princess hung tough for third. 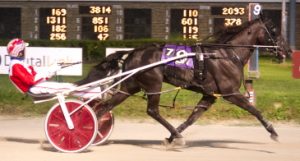 The second Carey split saw last year’s ICF freshman colt champion Dan D Dune (Casey Leonard) come up with his best race thus far in his sophomore season.
The Nelson Willis trained 3-year-old, saddled with the outside nine-hole, spent the early portion of the race in seventh and was fourth over when the 6-5 favorite Royal Rose sped to a 57.1 half.
However, Casey was getting live cover for Dan D Dune from the second-over BS Tyriffic. By the time Royale Rose got to the three quarters, Dan D Dune found another gear and was flying in the middle of the track and gobbling up ground with every stride.
In the last sixteenth Dan D Dune ($10.00), the third choice in the wagering, zipped past the leader and ended up almost three the best with his 1:53 flat mile. Royale Rose had to settle for second, with IYQ QYR taking third..
Dan D Dune, the 2015 Orange and Blue Colt champion, put over $120,000 on his fi6sr season card for Nelson’s wife Cynthia Kay Willis, owner of the gelding. Saturday’s Carey triumph was the pacer’s first in eight tries in 2016.
http://harnessillinois.com/wp-content/uploads/2021/03/ihha_logo_white_wtext_v2-300x130.png 0 0 Mike Paradise http://harnessillinois.com/wp-content/uploads/2021/03/ihha_logo_white_wtext_v2-300x130.png Mike Paradise2016-07-31 12:57:472016-07-31 12:57:47A Unique Driving Double the Hard Way