The opening legs of the last two Late Closer series and an Open III Pace with a strong contingent of ICF horses are the headliners on the initial Sunday card of Hawthorne’s summer meeting.

The $8,000 Tony Salvaro and the $8,000 Phil Georgeff, honoring two of the past popular Chicago circuit announcers, will go as back-to-back events (races 6 and 7), on the 11-race program.

Both Late Closers are for 3 and 4-year-olds without $10,000 in earnings through March 31st of this year. The Salvaro is for fillies or mares, while the Georgeff is a nine-horse field of colts or geldings.

The Illinois owned (Shirley Levin of Barrington Hills) pacers Jewel Maker (Juan Franco) and Extravagant Art (Kyle Wilfong), have the 5 and 6 slots, respectively. Both horses are trained by Nelson Willis and chalked up victories during Hawthorne’s winter meeting.

The Tom Graham Jr’s Gabe Henry, now a 4-year-old, racked up seven victories in 11 tries as a freshman including a streak of five in a row. The home bred son of Henry Clay was second in the Springfield Final, after winning his elimination and then took a division of Du Quoin’s Governor Cup for owner and breeder Carl Graham of Salem, Illinois.

Dinky Dune, owned and trained by Dane May of Newton, Illinois, busted out as a 3-year-old capturing both the Cardinal Final at Balmoral and the Dudley Hanover at Du Quoin before proving best on Super Night 2016 in the $112,000 Pete Langley Championship.

He Gone Jack (Casey Leonard), a 5-year-old under the care of trainer Ray Hanna, was a two-time winner in conditioned races this past winter at Hawthorne. After a 10 week layoff, the Richess Hanover gelding showed readiness for Sunday’s outing, with a 1:54.2 win in an April 21st Springfield Preview event, pacing the last quarter in 27 seconds flat with Casey for Joplin, Missouri owners Hugh Lake and Susan Lacey.

The three early programmed favorites in the sixth race, first round of the Salvaro—Indiana invaders Star Of The Show (2-1, Casey Leonard), ICY IYQ (3-1, Isaac Love) and My Kind Of Terror (7-2, Mike Oosting)—each have had success on the Hoosier Park oval.

Star of The Show won there as a freshman in 1:57 flat for the Rick Schrock Stable. The Trenton Watson trained ICY IYQ had the same winning time, when he took a series consolation race a month ago and Adrian Adam’s, My Kind Of Show, won an Indiana claiming series event on April 17th.

Pop Seed takes a substantial class drop Sunday night, out a higher level event at Hoosier Park for trainer Dale Knox, while Another Bettor was a game winner in a $10,000 Claiming Series Final, his second triumph in four recent Indiana starts. 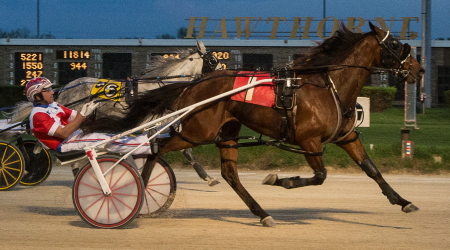 The Tom Simmons Stable’s Beach Shootingstar, captured last night’s first division of the Bob Larry Series with Casey Leonard at his lines. It was one of five winners for Casey on the Saturday card. (Four Footed Fotos)

Surprise Surprise: Last night’s Open III headliners, one for filly and mare pacers and the other for trotters, both produced upset winners.

Rodney Freese’s Pretty Image (Tim Curtin), put on a strong 26.2 last quarter burst to nip the 3-5 favorite Narcian Jewel (Casey Leonard), at the finish wire in the distaff Open Pace. Buckegirl Bobette (Kyle Husted), had a game first-over effort to be third in the 1:54.1 mile.

One race later, a bigger surprise occurred, when the Jamaica Patton trained trotter Primed N Powerful rolled on by in the stretch 17-1odds and popped at $36.60.

Patiently driven by Ryan Anderson, Primed N Powerful, raced in third throughout the race and when called on at the top of the lane, the 5-year-old gelding got into high gear and drew off by four lengths. The 1:54.2 mile was a career fastest for Primed N Powerful.

Anderson was back in the winner’s circle in the next race, the first division pf the Mike Paradise Late Closer Series with the even-money favorite Special Sauce, trained by Kim Hamilton for Illinois owner Orville Rursch (Taylor Ridge).

Ryan put Special Sauce on the front end soon after a modest 30.2 first quarter and the Sagebrush gelding held off the pocket horse U Makin Me Wait (Casey Leonard), by a half-length in the opening leg of the series for 3 and 4-year-old male pacers.

The 4-5 public’s choice Sports Analyst didn’t disappoint his many supporters in the second Paradise split. Trained by his driver Jamaica Patton the Sportsmaster sophomore bested Herecomesmagotta (Tim Curtin), by a half-length with a 1:55.3 clocking.

The opening leg of the $8,500 Bob Larry Series went to the Tom Simmons trained Beach Shootingstar ($3.60), capably handled by Casey Leonard. The time of 1:53.3 knocked off almost three full seconds off the winner’s previous mark.

In the second Larry Smith Sagebrush Shocker ($13.20) got his head in front of the favorite You’remyhearthrob at the finish wire. The 1:54.2 mile was the Ken Rocker trainee’s fourth season triumph and was one of five winning drives for Casey Leonard, who also had five second place finishes on the 12-race card.