Homepage
You are here: Home1 / Mike Paradise2 / An Unexpected Gem on Thursday’s Card

This week’s Thursday evening Hawthorne card got a huge boost, when the Race Office moved an ICF 3-year-old colt and gelding pace to it.

With the third leg of the Night of Champions Robert F. Carey series coming in two weeks, tonight’s headliner attracted most of the cream of the division’s crop in what has turned out to be a Carey prep event.

All three of the leading Robert F. Carey point earners through two rounds, will square off including unbeaten Fox Valley Gemini (Casey Leonard), from the Terry Leonard Stable.

If tonight’s third race feature was an ICF Open 3-year-old pace, last year’s Illinois Harness Horse of the Year would probably be leaving from the 10-hole in an eight-horse field but it’s not, and the usual draw for posts couldn’t have gone any better for Fox Valley Gemini’s boosters. 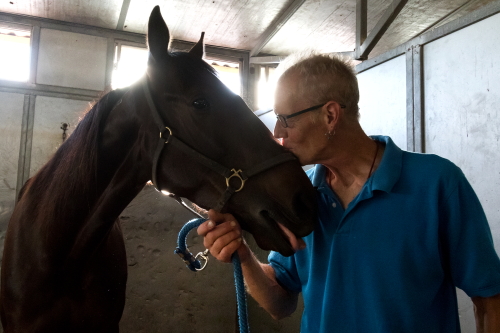 Fox Valley Gemini landed the pole position and looks to be in great shape to be 6-for-6 this season and extend his career winning streak to 15 in a row for Atwater, Illinois owner Jim Ballinger.

The Leonard Sable’s “Gem” drew off by more than five lengths in his first Carey series leg and was well in hand at the end of the 1:53.2 mile in his second, three lengths the best, when he increased his earnings to over $191,000.

Fox Valley Gemini’s lifetime mark at this time stands at 1:51.4, the same as second round Carey winner You’remyhearthrob, who leaves from the three slot with Kyle Wilfong for the Indiana based Wilfong family.

The fastest mile in Thursday’s field belongs to Backstreet Lawyer (pp 8, Kyle Husted). The Tom Simmons trained gelding uncorked a quick 1:50.4, clocking in his first Carey win and then coasted to a 1:53 mile on June 24th in his second stake series outing.

Owned by Illinoisans Jerry Graham (Salem), Benita Simmons (Springfield) and the Engel Stable (Buffalo Grove), Backstreet Lawyer was the third place finisher in a $15,000 ICF Open a dozen nights ago, when he took on older and more seasoned horses. The Sagebrush gelding is just $480 short of the $100,000 plateau in lifetime earnings.

Dandy Dude (programmed at 7-2), is trained by his Newton, Illinois owner Dane May and was second best behind Fox Valley Gemini, when they met in the second Carey leg and a Cardinal division

Al’s Briefs (5-2), won his Cardinal division on June 1st, his first of three in a row that month, but was never in position to contend in his June 24th Carey start when the Clark Fairley trained pacer left from the outside slot in an eight horse field.