Homepage
You are here: Home1 / Mike Paradise2 / “Anna” a Constant Star in Her Home State

On July 7, 2018, a year ago to this day, the star ICF trotting mare Ann’s Lucky Star finished fourth in a Hawthorne Open when she was assigned the 10-hole in a seven horse race.

It was the first time the talented state-bred trotter wasn’t first, second or third in a race in Illinois. Thus far in her brilliant career it’s still the ONLY time the Nelson Willis trained distaffer hasn’t been third or better competing in her home state for owner and breeder Danny Graham of Salem, Illinois.

Anna’s Lucky Star’s brilliance in Illinois covers 32 trips to the starting gate over a period of three and a half years. The Cassis mare out of the dam Queen Jamie went unbeaten as a two-year-old (6 for 6). The gutsy filly ran away with division honors at three, amassing $153,300 in purse earnings when she rattled off eight wins in a row including a sweep of the Beulah Dygert Night of Champions stake series.

Last season Anna’s Lucky Star was named the 2018 Illinois Aged Trotting Mare of Year when she captured four Hawthorne Opens, annexed both the Springfield and Du Quoin State Fair ICF aged mare crowns, and added another $72,000-plus to her lifetime bankroll. 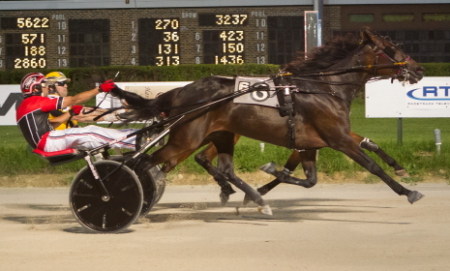 It was a scant nose that separated Anna’s Lucky Star (No. 8, Kyle Wilfong) and Mandeville (inside, Robert Smolin) in last week’s $12,000 Open Trot. The two talented trotters will duke-it-out again in Sunday’s fourth race feature.

Now five, Anna’s Lucky Star has been first or second in all five of her Hawthorne Open outings, dropping a photo to the Canadian bred trotter Mandeville (Robert Smolin) two weeks ago and then avenging that defeat last week with a nose victory over the Dean Eckley trained gelding, trotting a 1:54.3 mile.

It took a courageous effort by the Illinois bred mare to nip the front-stepping Mandeville at the wire a week ago.

Anna’s Lucky Star was almost four lengths behind at the half, trotted in a slow time of 59 flat, before she came flying the last half in a rapid 54 seconds. It was her 27th career victory and all but one coming in the state of Illinois. The mare won a $21,000 Invite at Hoosier last September.

Back in action after a month off is the Merv Chupp Stable’s very good trotter Pine Dream with Casey Leonard taking over the driving chores. The seven-year-old gelding is one victory away from 30 in a career that has seen the son of Pinetucky haul in over $260,000 in lifetime earnings and take a mark of 1:53.1 last year at Miami Valley in Ohio.

On A Roll: Boogie On Down made it back-to-back victories in the Open Pace for fillies and mares and three straight at Hawthorne last night for the ICF five-year-old homebred mare trained by Brett Wilfong.

A heads-up drive from Kyle Wilfong went a long way towards Boogie On Down’s 1:53.4 winning mile. Even though most of the mare’s previous dozen career triumphs came on the front-end, the 28-year-oldWilfong changed tactics with her in the$12,000 feature.

Starting in the seven-slot, just to the right of Rollin Coal (No. 6, Juan Franco), Kyle ducked his mare at the start behind the 2-1 betting favorite while the Ohio invader Ask Me Ifi Care (Mike Micallef) was cutting the fractions.

When Franco pulled Rollin Coal out of seventh on the backside, Wilfong followed her up with Boogie On down. Rollin Coal raced without cover while Boogie On Down enjoyed the trip behind the eventual third-place finisher. In the lane Boogie On Down proved fastest for the Wilfong family, one length better than runner-up Sweetshadyshark (Ryan Anderson).