Homepage
You are here: Home1 / Mike Paradise2 / Another Prize for Ronnie Roberts Stable?

A number of ICF 2-year-old pacing colts and geldings will go to the starting gate for the first time in a pari-mutuel race Friday night, when the first leg of the Incredible Finale stake series is contested.

However, all it takes is a quick glance at  Hawthorne program’s second race, the first $17,500 Night of Champions series division, and RJ Wulfy’s last past performance line will grab your attention, and then some.

RJ Wulfy not only got a race under his belt last week, but the Ronnie Roberts freshman beat a field of older horses and did it in a quick mile of 1:55.3 rather convincingly.

“The horse got a great drive from Casey Leonard,” said veteran trainer Ronnie Roberts. “I wanted him to race RJ Wulfy inside like he did in his qualifier. He did just that and when Casey was able to find an opening in the stretch, the horse just took off.”

RJ Wulfy was seventh at the half, seven-plus lengths from the pacesetter, and still was sixth at the three-quarter pole, six and half-half lengths behind. 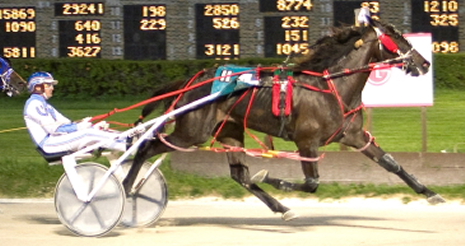 When I handicapped RJ Wulfy’s race last week, the freshman bloodlines looked familiar, so I did a little research and realized he is the younger brother of Prize Art, a terrific pacer for Roberts some 11 years ago. I made RJ Wulfy my “Price Shot” for the night but didn’t get much of a price. He paid $8.20, so plenty of other people did their homework as well.

Prize Art had a heck of a 2008 season as a 3-year-old for Roberts, winning 11 of 24 starts and earning over $123,000.The horse was particularly good at Hawthorne, finishing first there in 5 of 6 starts, including a sweep of the Booze Cruzin Night of Champions series and taking his mark of 1:50.2.

Prize Art went on to win his Pete Langley elimination at Balmoral and finished fourth in the Super Night final. Roberts took Prize Art to the Meadowlands, where the pacer won a pair of $24,000 Preferred events, his last two starts that year.

“Prize Art was a great horse for me and my good friend Reed Remley,” continued Roberts. “The horse brought us lots of joy. Unfortunately, Reed passed away a couple of months ago so he never saw Prize Art’s brother (RJ Wulfy) race. Every time this colt goes out I’m sure I’ll be thinking of Prize Art and Reed.”

Even with RJ Wulfy’s stunning 1:55.3 debut Ronnie didn’t want to get hopes up too high on the freshman.

“He’s a two-year-old and you just don’t know how things will play out with 2-year-olds. One day they’re on top and another day they can be on the bottom.”

I have more than hunch Ronnie will be looking a lot more upwards this summer when it comes to RJ’s Wulfy.

Casey will also be behind the likely second Incredible Finale division favorite Canadian Mountie (pp 2), beaten less than one length in a 1:59.4 qualifier.