Homepage
You are here: Home1 / Mike Paradise2 / Another Yankee Blue Filly on the Road to Success

Fox Valley Minka’s easy victory in the first leg of the Dave Magee Late Closer has jump-started the Terry Leonard Stable youngster into the role as the favorite in the series for ICF 3 and 4-year-old pacing fillies.

Unraced at two, the Sportsmaster filly out of the Incredible Finale broodmare Yankee Blue is already two-for-two at the meet and cruised in both of her career starts with Casey Leonard at the lines.

Fox Valley Minka coasted to 1:57.3 win on opening night and last week it was a three-length romp in the park in 1:57 flat under wraps.

While it’s just two starts into her racing career, Fox Valley Minka may just be on her way following in the hoof steps of some of her highly successful older ICF brothers, all bred by Fox Valley Standardbreds of Sherman, Illinois.

Their broodmare Yankee Blue only had one full racing season for the late trainer Doug Hamilton and that was back in 2001 when she won 5 of 27 starts and made a little over $23,000 in a campaign cut short at the end of that August.

Three months later Yankee Blue was purchased by Fox Valley Standardbreds and has since produced an impressive list of ICF pacers. 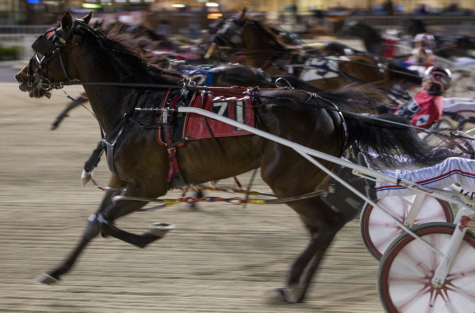 Fox Valley Minka sprints out at the start of last week’s opening round of the Dave Magee series where the 3-year-old posted a second straight win at the Hawthorne meet. (Four Footed Fotos)

All nine of Yankee Blue’s sons or daughters made it to the races and all visited winner’s circles, three on Super Night’s. Two of her sons had lifetime marks under 1:50, Fox Valley Tribal (1:49) and Fox Valley Yukon (1:49.4), while Mystical Walter won in 1:50 flat at Balmoral Park as a 3-year-old.

The gelding Fox Valley Yukon took the 2011 Pete Langley 3-year-old consolation stake for trainer Rob Rittof. The pacer went on to put more than $245,000 in lifetime earnings on his card.

As a 3-year-old in 2013 Mystical Walter rattled off victories in a Balmoral Hanover stake, the Springfield championship, and Balmoral’s $173,000 Pete Langley Super Night Final, all with Casey Leonard in the bike for trainer Erv Miller. Mystical Walter ($385,745) would join the Leonard stable at age six and post 7 wins in 13 trips in two seasons of work at Hawthorne.

Friday night is the second leg of the Dave Magee Series and we’ll see Fox Valley Minka leave from an outside post at Hawthorne for the first time. She drew the 7-slot in the sixth race eight horse field for her Indiana owners John McGill (Albion) and Brian Carsey (Connersville) and is the prohibitive 4-5 morning line favorite.

Also on tap Friday evening are two second round divisions of the Daryl Busse trot series (races one and five), along with a single second leg division of the Walter Paisley for filly and mare pacers (race two).