Six state-bred Illinois conceived and foaled Standardbreds were crowned Illinois Department of Agriculture stake champions last night with the most impressive performance going to Michael Perrin’s Apple Valley in the second division of the Violet Pace for sophomore fillies.

Apple Valley blew away the field in her division, winning with a quick 1:51.4 mile, one of many new lifetime marks on the nine-race program. 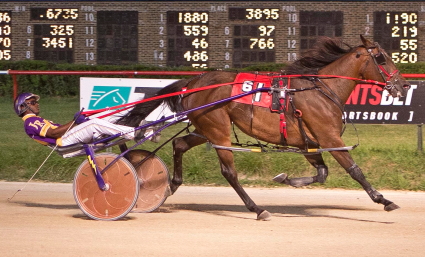 Rollnrozz took early command before Ross took Apple Valley out of third and after the leader. But Rollnroz ‘s driver Archie Buford wasn’t going to give up the lead without a fight. Th pair raced side-by-side most of the backstretch enroute to rapid 27 flat second quarter.

In the stretch Apple Valley was simply too good for this field, drawing off by more than six lengths. Rollnroz was a game second while Kizzzmelikeumissme grabbed third.

Casey fourth triumph came with the favorite Loudobbs in the $44,100 Cardinal trot for ICF second season colts and geldings, Casey gave the Steve Searle trainee a two-hole trip and Lousdobbs did the rest, drawing away by four lengths with a new mark of 1:56.2.

Fox Valley Cairo (Mike Brink) came a long way to take the runner-up role. Romanic Warrior (Gary Rath) made up a lot of ground to be third.

Surprise in Finale: The shocker of the night came in the $46,700 Cardinal trot, the final race of the night, when Josie Rocksmyworld, patiently handled by Travis Seckman, powered past the top Illinois bred pacing males at 32-1odds.

Seekman took the Michele Weinmann trainee back at the start and Josie Rocksmyworld raced in sixth most of the way while a heated battle for the lead saw Fox Valley Crete take the field to a quick 55.3 half. 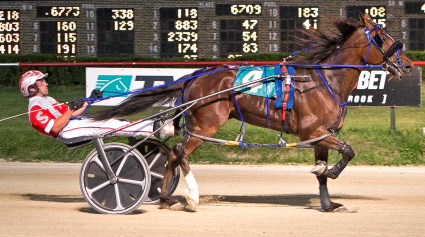 Josie Rocksmyworld, a homebred owned and bred by Janet Betley of Wright City, Missouri, rush past the likes of Kingofmyheart, Get E Up, Fox Valley Crete and Fox Valley Ozzy, the second through fifth place finishers.

The winning time of 1:51.4 was almost three seconds faster than “Josie’s” previous fastest mile as the winner returned a hefty $67.00 to his backers.

“Monamie” Stays Hot: The first division of the $23,550 Violet trot for ICF three-year-old fillies kicked off the opening night stakes bonanza and it went to the Steve Searle stable’s Lous Monamie, nicely handled by Casey Leonard.

The 8-5 second choice in the wagering sprinted out from the outside six post and into a quick lead and when the 6-5 favorite Fiftini (Kyle Husted) made a break in the first turn while in the two-hole Lous Monamie ($5.40) had things to herself from then on.

After a :57.3 half, Lous Monamie turned it on in the lane and won in a new lifetime mark of 1:56.4 by three and one-half lengths. Creations Dream V (Jamaica Patton) rallied for second and the pocket horse Hot Trotin Trixie settled for third.

Lou’s Monamie, bred by Flacco Family Farms of Alexis, Illinois who share ownership of the trotter with All-Racing Racing of Morton, Illinois only had one win in six starts as a freshman but she’s a perfect three-for-three as a sophomore, the last pair coming at Springfield.

Never in the Hunt: The 2021 ICF Two-year-old Trotting Filly of the year Funky Wiggle was hammered down to 1 to 2 odds but never made the gate. She dropped back before the start and was never a factor. 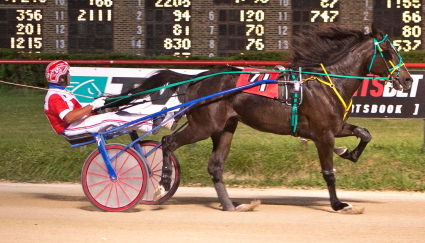 Instead, it the Lous Xanadu ($10.40) who prevailed for trainer Steve Searle and owners and breeders Flacco Family Farms. The 1:56.2 mile knocked two full seconds off the daughter of Lous Legacy previous fastest mile.

Ironclad Creation was second and Jazleyn took third. The pacesetting Armbro Lark (Kyle Husted) faded to fourth in the lane.

Heavy Favorite Falls: All eyes were on Merv Chupp stable’s heavy 1 to 5 favorite in the initial division of the Violet Pace and the three-year-old filly event but the 6-1 shot Pattycake Mooss (Casey Leonard) had another idea in mind.

Pattycake Mooss ($13.40) shot to the front right from the start and Kyle Husted was satisfied to race Dandy’s MNM in the pocket. They vied that way through a 57.3 half and into the stretch where Dandy’s DNM took over the lead however later in the lane the Gary Rath trainee found another gear and pulled off the upset with a 1:54.2 clocking and a career fastest mile.

Owned by Al Beals of Berwyn, Illinois, Pattycake Mooss finished three-quarters of a length the best.