Homepage
You are here: Home1 / Mike Paradise2 / Are There More Series Surprises?

When the 3-year-old ICF filly Ryan’s Mistess last week swept past the field, in the last quarter of the mile to capture the opening leg of the Dave Magee Late Closer Series at 27-1 odds she obviously stunned a lot of horseplayers.

Maybe her new driver Juan Franco might have been a bit surprised as well. After all, the Guatemala native didn’t know a whole lot about the home bred Flacco Family Farms filly before he got in the bike behind her.

Ryan’s Mistress spent her 2-year-old season almost exclusively on the Illinois County Fair Circuit, going postward 21 times and winning two starts. The filly raced for Ronnie Gillespie at the Hawthorne winter meet and could only manage one small check, with a non-threatening fourth place finish in a low-end maiden-claimer. She was a far back eighth and sixth in her other two tries, both conditioned events.

Franco didn’t drive the filly last month in her Springfield prep. He didn’t even warm up the horse before her Magee series start. Did he get a chance to talk to her current trainer Roshun Trigg before the race?

“No I didn’t,” replied Juan. “Before the race I did talk in the paddock with the people who take care of the filly and they filled me in on her, pointing out that she can get hot-headed. So I didn’t want to rush her out of there (from the 7-slot). I just let her go out on her own and dropped her in.” 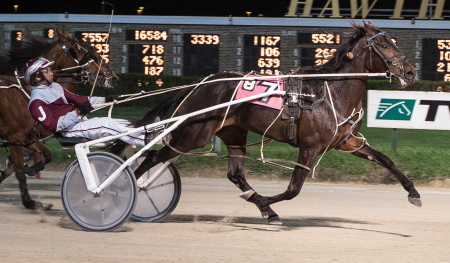 The Flacco Family Farm’s homebred, Ryan’s Mistress, made an auspicious first impression for her new driver, when she pulled away with Juan Franco in the first leg of the Dave Magee pace series. (Four Footed Fotos)

By the half Juan found himself in seventh place in the 10-horse field, not exactly in a great spot. At the three-quarters Ryan’s Mistress was fifth but more than 10 lengths off the leader.

“That’s when I pulled her ear plugs,” said Franco. “She then took off (27 flat last quarter) and won the race all on her own.”

The 1:58.1 winning mile locked-up a starting berth in next week’s Dave Magee Final. In tonight’s second series leg, Ryan’s Mistress will leave from the seven-post in a seven-horse field.

Friday’s feature arrives early on the 10-race card. The third race brings out a company five-horse field of Open I pacers handicapped by groups (1-3) and (4-5). Each starter has the credentials to take the $10,000 headliner.

No. 1 Hot Rod Dylan (Juan Franco), was a 12-time winner last year for the Nelson Willis Stable and comes off a solid effort at Hoosier, his first outing in almost seven months.

The Jim Eaton Stable’s Account Hanover (pp 2, Kyle Husted), shipped in from Ohio, where he was a two-time winner earlier in the year. He’s no stranger to the Chicago circuit and boasts a 1:50 career fastest mile taken at the Meadowlands as a 4-year-old. 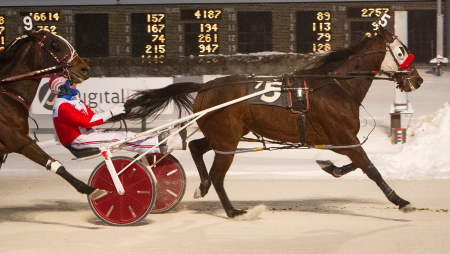 The Terry Leonard Stable’s Trashytonguetalker (pp 4, Casey Leonard), has been a fan favorite  at Hawthorne. The 6-year-old gelding finished the winter meeting with four consecutive victories, including the February 11 Open Pace. His 1:53.3 winning qualifier eight days ago, signifies he’s ready for a big effort tonight.

The Perry Smith Stable’s Feelikearockstar (pp 5, Tyler Shehan), was a consistent purse earner in recent Opens at Miami Valley Raceway in Ohio. The 6-year-old gelding already has over $56,000 on his season card and has had past success on Hawthorne’s big track.

An Open III Pace is the secondary Friday feature and it has a full field of 10-pacers. Last week’s Open III victor He Gone Jack was assigned the 10-hole by the Race Office after his 1:53.2 triumph.

Lous Silver Star (programmed at 9-2,Tyler Shehan), guns for her fifth win in a row for trainer Roshun Trigg, in the fourth race second leg, of the Bea Farber Series for trotters, when she takes on Dr Spengler (12-1), Southern Appeal (12-1), Totally Pazzazzed (7-2), True Detective (5-2) and Bazaar Bazaar (2-1), again.

The other trot series on the card is the sixth race Daryl Busse, where again The Brett Wilfong Stable’s Never Say That, drew another outside post. However, last week it was the 10 in a 12-horse field. This time around it’s No. 7 in a 7-horse field.

Round two of the Walter Paisley series is the Friday nightcap. The 2-1 first flash favorite, Fox Valley Catwalk, goes after his seventh consecutive triumph and his second in the Paisley, The Rodney Freese owned and trained ICF pacer barely got the job done a week ago, edging Princess Oshie (opens at 10-1), by a head and the third-place finisher C Far (6-1), by a half-length.

A newcomer to the second leg of the Paisley, is the Jim Lackey Stable’s Rockinroundheaven (12-1), who made the long trip to Hawthorne from Cal Expo in Sacramento, California.

The opening legs of the Cicero Claiming Series with $6,000 price tags also get under way tonight. The two divisions for fillies and mares will go as race two and five. The eighth race is round one for horses and geldings and it landed a nine-horse field of $6,000 claimers.