This weekend it’s time to unveil the season’s ICF two-year-old stake pacing and trotting aspirants as Hawthorne’s Night of Champions series gets under way for state-bred juveniles.

In addition Hawthorne players will have the advantage of at least one past performance line to gaze at on most of these freshmen horses thanks to the ICF Two-Year-Old Standardbred Preview conducted 10 days ago at the Illinois State Fairgrounds.

Ten races were run off and for most of the two-year-olds it was the very first time these “babies” ever competed in a race.

While one event from these youngsters undoubtedly is not much to go on as far as how their racing futures will unfold, it’s a step in the right direction for some, and a learning experience for all. 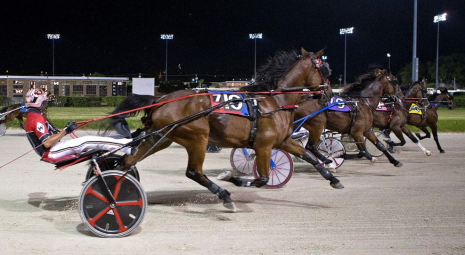 They’ll be off and racing Friday night at Hawthorne with a strong 13-race card featuring the first round of the Incredible Finale 3-year-old colt and gelding stake, second round action of the Plum Peachy stake series, and the popular Open Pace. (Four Footed Fotos)

The fasting winning time, hands down, was the 1:58.3 mile by Ed Teefey’s homebred Major Grin (Casey Leonard) in a freshman male pace division. Trained by Mike Brink, the son of Major Bombay, out of the Western Terror broodmare Terror Grin, came off the pace to finish first by two and one-quarter lengths.

Major Grin will go postward tonight in the first race with Casey as the 6-5 programmed favorite off his strong Springfield mile.

Frontier Bombay is the younger brother of Frontier Charley, the 2020 winner of the Incredible Finale final for Eaton.

Also going to the gate in this year’s opening round of the Incredible Finale are Knox The Fox, Royale Ryan, Illini Storm, Magazine Theme, No Way Bombay, Pericles and Likely Blue Bayou.

Foxy Matchup: The fifth race second division could see a lot of play go to both the Nelson Willis stable’s Fox Valley Crete (Kyle Wilfong), the 2020 Illini Classic Sales topper at $52,000, and the Gary Rath trained Fox Valley Ozzy, a $14,500 buy who beat “Crete” by more than four lengths when they met in Springfield on June 17.

Those two will be confronted by Getaway, Dandy’s Sushi, Bigday Bombay, Cuz We Have Eight, Cole Thornton, Arcadia Sportacular and Get E Up., a $30,000 yearling purchase.

The Night of Champions event is headed up by first round winner Hart’s Heart (Kyle Wilfong) and Violet stake champion Scorecard Dandy (Juan Franco), a head better than his Mike Brink trained rival earlier this month.

Looking to knock off the above pair is Bootsy Bombay, the 2020 Incredible Tillie champion, along with Princess Mooss, Kandi’s Fortune, Ryans Secret and Clearly The Bomb.

Our Stars Shunned: Just to make things even more enjoyable for your viewing the $12,000 Open Pace will go as race six with Illinois top two aged pacers Fox Valley Gemini (pp 7, Casey Leonard) and He’zzz A Wise Sky (pp 8, Kyle Wilfong) squaring off for a fifth time this season.

So far, they talented duo have split their first four season meetings. Whereas “Gemini” received last week off He’zzz A Wise Sky went to Hoosier Park and took on the best in Indiana where he finished a respectable third.

A newcomer to the Hawthorne Open is the Running Aces invader SB Bodacious (pp 6), who will be driven by his trainer Rick Magee. The Iowa bred standout has won 3 of the last 4 Opens, the best in 1:51.2, at the Minnesota track, good enough says the USTA computer generated morning line to open as the 2-1 favorite.

Posts one through five in the Open belong to Tremendous Play, On Duty, Pokerface Bluechip, Fox Valley Ren and Dash Of Danger.