The string of those eight consecutive champions events started with a fifth race $32,500 showdown for ICF two-year-old trotting fillies and it turned out to be a battle between the two Steve Searle trained fillies with Bee See ($9.20), upsetting 3-5 favorite Los Abigail.

Driver Kyle Husted had to take the winning filly three-wide on the backside to get around the tiring pacesetters, Really Ralee and Celone Hall, while Casey Leonard had Lous Abigail in great shape second over at the 57 half.

Lous Abigail had dead-aim on Bee See in the stretch but the Cassis filly held firm, fighting off her stablemate’s bid and winning with a new lifetime mark of 1:56.1 by three-parts of a length, for owners Mandy Baldes (Urbana, IL), Michael Paloma (Chicago, IL), Chris. Paloma (Cedars Rapids, Iowa) and trainer Steve Searle (Grant Park, IL).

Lauren Hall (Mike Brink), came on to be third.

Sleazy Gal ($12.00), was hustled out from the outside post and was parked out three-deep much of the way to a rapid 26 flat first quarter. Sign Her Up (Juan Franco), came out of third to get command and the 4 to 5 favorite Double Parked, was sent from fifth to try and get the lead, but she stalled on the outside of the leader. 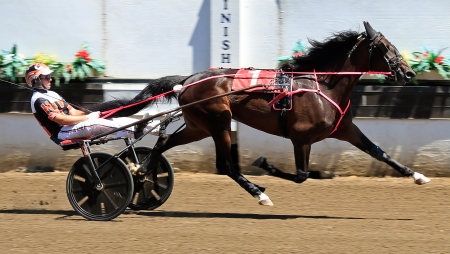 At the half, the 13-1 longshot Ashlee’s Fine Girl (Luke Plano), put her neck in front, however Wilfong slid Sleazy Gal between the two leaders and the winning Sagebrush filly showed no quit, making the front by the three-quarter pole and holding off Ashlee’s Fine Girl by one length, while the 10-longshot Amazon Princess came on well to be third.

The juvenile colts and gelding finals were next, with the two-year-old trot championships and again a heavy favorite went down to defeat as On High Ground (Ridge Warren), stalked the front-stepping Fox Valley Quest (Casey Leonard) and out-closed the 3 to 5 public’s choice in the lane.

The Mike Brink trained, On Higher Ground ($9.20), knocked three and three-fifth seconds off his previous fastest mile with a 1:55.1 clocking for Illinois owners H.H. Wright (Morton) and Brink (Springfield), who drove Desert Sheik to a third place finish in the race.

Fox Valley Wren (Kyle Wilfong), became the first favorite of the day to win an ISFCS championship, but it didn’t come easy in the two-year-old colt and gelding final. Wilfong urged Fox Valley Wren away from the nine slot and dropped him into fourth, when RS Racer (Travis Seekman), zipped to a 26.1 first panel.

Wilfong had Fox Valley Ren on the move on the backstretch and on top before the half (54.2). The winner had to fight off a bid by Chick Magnet (Kyle Husted), through the third quarter with RG’s Racer in the pocket and poised for the stretch drive.

RG’s Racer gave the Nelson Willis trainee all he could handle, but was a neck behind at the finish. The 1:52.3 mile shaved a full second off the previous best time for Fox Valley Wren, who now has won five in a row.

The last four races on the card were the ICF 3-year-old finales.

Kyle Husted gave the prohibitive a 1 to 5 favorite Louzotic a heady drive and the star of the Steve Searle stable won for the eighth time this season in the three-year-old filly trot championship. 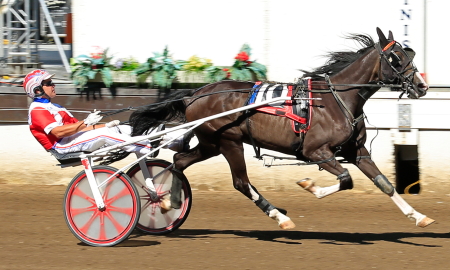 Husted was able to give Louzotic some middle quarter breathers of 29.2 and 29.4 and the filly had more than enough off to keep Heidi High from overtaking her. Louzotic is owned and bred by Flacco Family Farms of Alexis, Illinois.

The Flacco Family Farms also own and bred Lousraptor (Casey Leonard), who came from far back to zip past in the three-year-old colt and gelding trot final. The time of 1:54.4 was two full seconds faster than the Lou’s Legacy gelding had previously trotted.

The 22-1 longshot, Super Betcha (Mile Brink), took the field to a quick 56.3 half before retreating. The two-hole trotter Lourhianon (Luke Planno), then took control and led in the lane before he went off stride. The break took place just as Lousraptor ($3.40), was powering past for his fifth win of the year.

Next up was the three-year-old filly pace and once again it was Kyle Wilfong in the winner’s circle. Kyle’s fourth winner of the day was the late-charging Perch ($11.60).

Wilfong (pp 8), took his talented filly back at the start as the 12-1 longshot Fox Valley Kim (Kyle Husted), cut sizzling fractions of 25.3 and 53.2. Casey Leonard tipped the 1-2 favorite Fox Valley Torrid out off third, overpowered the tiring leader and was on top at the three quarter pole, reached in 1:22.1.

However, Perch was gaining on “Torrid” with every stride and Wilfong’s well-timed move saw the Jay Garrels trained filly roll past and prevail in 1:51.1 by more than one length.

You guessed it, another new lifetime mark. 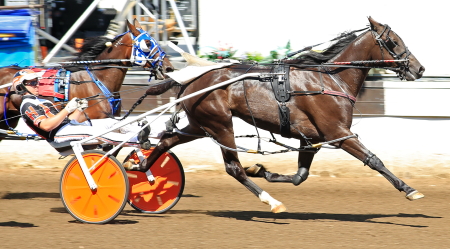 Meyer On Fire (Kyle Husted), came away with the three-year-old colt and gelding pace championship at the Springfield State Fair. (Four Footed Fotos)

The three-year-old colt and gelding pace championship saw Meyer On Fire pull away in the lane with driver Kyle Husted enabling owner Marty Engel’s return to the winner’s circle to receive a trophy from Illinois Governor JB Pritzker.

Meyer On Fire scooted to a career best time of 1:51.2 and that meant that ALL 12 winning horses on the card set new lifetime marks.

Fox Valley Triton nosed out the pace-setting Maximus for second.