The John Zawistowski Stable’s Fresh Cut, will try to buck the odds and overcome the outside nine-slot in Friday night’s headliner and get a repeat victory in the sixth race Open Pace II event.

The $8,800 Open II was drawn by groups with Fresh Cut among the collection of six horses who could have drawn anywhere from post four to the nine-hole. The American Ideal pacer landed the outside post. 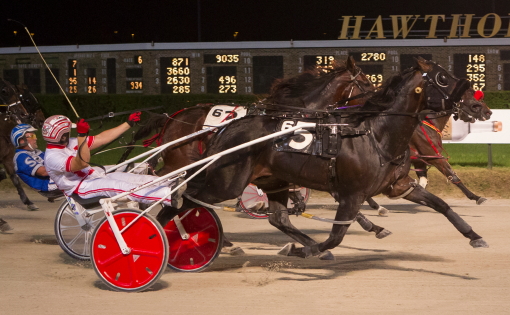 However, Friday’s starting point is a minor misfortune compared to the adversity Fresh Cut faced earlier in his racing career. The pacer missed the entire 2017 season for Plainfield, Illinois owners Diane and Andrew Chudzik and was a longshot to make it back and ever compete again.

Fresh Cut had a superb 3-year-old campaign for former Illinois based trainer Erv Miller, raking in over $238,000 while racing in mostly New York bred stakes. The crown jewel of the horse’s sophomore campaign came with his triumph in the $240,475 Empire Breeders Classic for driver Marcus Miller.

I’ll let Fresh Cut’s trainer John Zawistowski tell you what transpired after the pacer joined the Chicago native’s barn in mid-November of 2016.

“We bought Fresh Cut at a sale for $85,000. He had a big year as a 3-year-old. I was at The Meadows when we got him and I wanted to race him just one time before giving him the winter off.  However, the one-time I did race him he broke a coffin bone and it was a bad break. At the time I didn’t think he would be able to come back and ever race again. I gave him all of last year off and his injury healed up very well. I started training him back and the first time he did come back and race he came up sore. So I stopped with him again and gave him another couple of more months off. I was in Indiana and Dale Hiteman helped me out with the horse. The next time we raced him after his latest layoff he won his second start in 1:51.1 at Hoosier with Dale.  Fresh Cut has raced well at Hawthorne and I’m very pleased the way Ridge (Warren) is driving him. Last week Ridge gave him a second-over trip and the horse came home (26.3) strong. Fresh Cut is a good horse. I believe he’s a 1:50 pacer. If he didn’t get hurt he probably would be a 1:49 pacer. He has some arthritis issues, but he’s still a fast horse and has shown he can race with the Open horses at Hawthorne.”

Chris Banks, Winning with Two Breeds No Place Like Home for Anna
Scroll to top