Bucklegirl Bobette, the queen of the Illinois bred mare pacing division was hammered down like she was a sure thing last night and she proved to be just that, winning in easy fashion in her return to Hawthorne Race Course.

The sometimes erratic Hawthorne computer morning line listed the easy winner of the $10,000 Open Pace for fillies and mares as the second choice (2-1) behind Char N Mar (9-5) but the Chicago circuit betting public knew better, sending Bucklegirl Bobette off as the prohibitive 1 to 9 favorite. 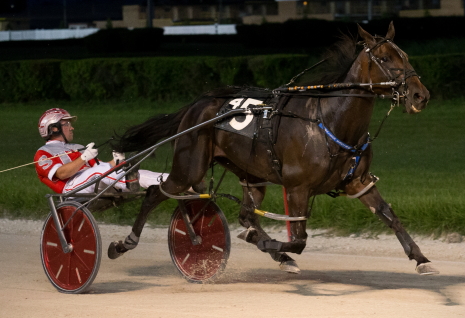 Bucklegirl Bobette (Travis Seekman) breezed to her fifth consecutive victory at Hawthorne Saturday night as the overwhelming 1 to 9 favorite in the $10,000 Open pace for fillies and mares. (Four Footed Fotos)

Travis Seekman got the catch drive behind the Rob Rittof trained 6-year-old ICF star back home in Illinois after an unsuccessful trip to Indiana. Bucklegirl Bobette was “handicapped” with the five-slot in a five horse field in her local return and Travis didn’t take any changes with the mare, hustling her out and into the lead before the first quarter was reached in a modest time of 28.3.

Boogie On Down (Kyle Wilfong) settled in for a two-hole trip with Pretty Image (Tim Curtin) third in the early going and the 6-1 second choice Char N Marg (Casey Leonard) fourth.

The field remained that way through a leisurely 57.1 half, making the task of nailing down her fifth consecutive victory at Hawthorne almost a certainty for Bucklegirl Bobette.

Seekman led Bucklegirl Bobette out a notch in the last turn when she paced a 27.3 panel and the Duneside Perch mare was under wraps at the end of her 1:52.1 mile, almost four lengths the best. Boogie On Down took second, edging out Pretty Image.

Saturday’s victory was “Bucklegirl’s” eighth of the season in 17 tries and the 22nd of her superb career in 46 trips postward for Illinois owners Robert and Charles Walker (Carrollton), Robin Klinger (Carrollton) and Hart Walker (Jerseyville).

One to Remember: Later Saturday night Juan Franco made his first drive behind Walter White a memorable one in the $10,000 Open Trot when the Guatemala native guided the Jim Eaton trained gelding to a 1:53.3 clocking, a time that equaled Hawthorne’s track record for an aged trotter. 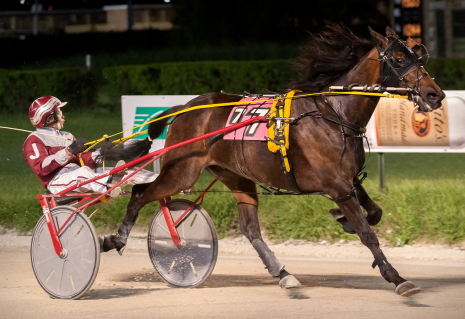 Walter White left from the seven slot in the eight-horse field and made the top at the first quarter pole, timed in 28.3. After back-to-back 28.1 middle quarters the Cantab Hall trotter pulled away in the lane and won by three and one-half lengths at surprising 9-1 odds, paying $20.00.

Springfield Draw Tuesday: A double draw will be held Tuesday morning at Hawthorne for the first two cards of the Springfield State Fair, Friday August 10 and Saturday August 11. The opening day Friday program will include most of the Illinois State Fair Colt Stake elimination races.

Then two exceptions are the ICF 3-year-old colt and filly pace elimination events that will go on Saturday, August 11. A $200 entry fee is necessary for all the Springfield State Fair Colt Stake races. If any class doesn’t split, a prep race will be carded. To race in a championship, it is mandatory for a horse to compete in a prep race or in an elimination.

Entries must be made for Friday’s and Saturday’s Springfield programs by 10 am by either calling the Hawthorne Race Office (708-780-3690) or by entering online.

The ICF freshmen colt trot and filly trot, along with the 2-year-old colt pace, were split into divisions, all with $8,375 purses. The single 2-year-old filly pace division with six starters carries a $15,950 pot and consists of Sandy Dune, Ain’t Got No Money, Lilly Von Shtupp, Fox Valley Bianca, Carolina GR and No. 6 Ryans Rica in the second tier.

A Reminder: This upcoming week begins the first of four consecutive Thursday nights in August without live racing at Hawthorne. The Friday through Sunday format will continue to the end of the month.