Homepage
You are here: Home1 / Mike Paradise2 / Bucklegirl Bobette off to Exhilarating Start

Round two of the Late Closer Series for filly and mare pacers are sprinkled throughout Friday’s 12-race program at Hawthorne and if the first leg action is any indication, we could be in store for more stunners this time around.

One of the surprises last Friday came in the ICF series for non-winners of two races when the Bob Walker trainee first starter Bucklegirl Bobette simply crushed 11 other state-bred fillies in her very first pari-mutuel start.

Bucklegirl Bobette was sent off at 4-1 and I have to admit I thought she would be at greater odds. The Duneside Perch filly drew the 12-slot in the field and for those not familiar with that post at Hawthorne, it’s in the second tier with 10 fillies in front of the horse and another to her left. 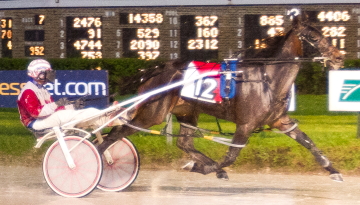 The race also came during a downpour. However Bucklegirl Bobette did have the meet’s leading driver Casey Leonard at her lines and the 38-year-old Illinois native managed to avoid potential road problems with the post and Bucklegirl Bobette did the rest, drawing off by 5 and 1/2 lengths in 1:56.4 in the slop.

I caught up with her trainer Bob Walker who many of you might remember was the trainer who gave us the illustrious ICF pacer Taser Gun (1:49.2,$1.15 million) who from 1997 through 2005 was one of the premier pacers in our state, winning an amazing 69 starts, often against elite ICF and open company pacers.

“We were concerned when Bucklegirl Bobette got the 12-hole,” continued Bob. “She was never in that situation before and you just don’t know what’s going to happen from there.

“We have to give Casey a lot of credit. He steered her pretty good in that race and avoid any problems.”

Since I didn’t see Bucklegirl Bobette’s name listed among the nominations Hawthorne’s Plum Peach 3-year-old filly pacers I thought she wasn’t staked to anything in our state.

“Yes she is,” replied Bob. “She was nominated to the Plum Peachy but her name then was Miss Molly By Golly. We changed it to Bucklegirl Bobette after my daughter Bobette who runs “The Buckle,” kind of a high-end clothing store at the White Oaks in Springfield.

“The filly’s owner and breeder Russell Crotchette of Jerseyville trains in out of our barn and he has 3 of 4 young horses. My son Hart liked the filly we ended up getting a lot. We asked Russell if he would like to sell her and he did, so we bought her about three months ago.

“We saw a lot of potential so that’s why we bought her. She had some problems we had to work through and we did. We were very happy with her performance last week. We’ll do a little more tweaking with her and hope she goes on to be a good filly for us.

“Did we think this filly could be this good? Well, yes but you never know it until they go out and prove it.”

Tonight Bucklegirl Bobette landed the 8-slot in leg two of her series, no easy task with an 11-horse field. She rates at 2-1 in my early line with Likeafireballshot (7-2, Jared Finn), True To My Heart (9-2, Dale Hiteman) and Exclusive Design (6-1, Travis Seekman) among her main rivals.

On the Brink: A trio of second leg Late Closer (No. 17) events was contested Thursday night with the Mike Brink Stable trotters coming away with two of them, both driven by the Springfield based conditioner at double digit prices.

First Brink guided Fox Valley Diamo ($18.80) to a 1:59 flat triumph in the first split and one race later he drove the 13-1 longshot Pass The Plate to his maiden victory, Both Brink trainees won by two-plus lengths in the same time of 1:59 flat.

The Curt Grummel trained filly Powerful Princess ($3.80, Casey Leonard) was much the best in the third split with her 1:58.3 clocking.

The Late Closer (No. 18) series for trotters without two wins as of April 1 went the same way as the opening round with Skyway Jaylo ($3.00), trained and driven by Larry Lee Smith, breezing to his second straight, this time in 1:57.1.

Second round action of the Late Closer (No. 8) series for $5,000 claimers saw Perry Smith’s Charley’sfastcat ($8.40, Kyle Wilfond) more than three lengths the best with his 1:56.1 mile and the Ronnie Roberts trained Don’tgetbyme ($3.20, Todd Warren) finish a neck ahead of Bossa Nova Baby in the second, timed in 1:54.4