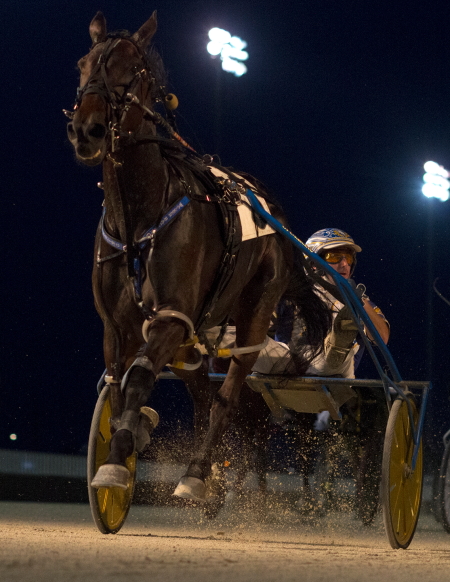 The reigning queen of the ICF pacing mare division is back home.

The Rob Rittof stable’s Bucklegirl Bobette heads up Saturday evening’s $10,000 Open Pace for fillies and mares, a class she thoroughly ruled over at Hawthorne in June and July. Ryan Anderson will be reunited with the 5-year-ol Duneside Perch mare in the fourth race co-feature.

The distaff Open was handicapped and as expected Bucklegirl Bobette was assigned the outside post but since there are only four other challengers the five slot gives Ryan options with last year’s Night of Champions victor and the early favorite in this year’s $45,000 (est.) Tony Maurello Memorial showdown on September 22nd.

While Bucklegirl Bobette’s opponents tonight may be small in numbers they have the talent to give the mare all she can handle. Fox Valley Aubey (Juan Franco), Boogie On Dow (Kyle Wilfong), Pretty Image (Tim Curtin) and Char N Marg (Casey Leonard), in that order, start inside the likely post-time favorite.

Bucklegirl Bobette proved best in four consecutive races earlier at Hawthorne and won each one of their in comfortable fashion. She had back-to-back sub 1:51 triumphs with a pair of 1:50.3 miles for Illinois owners Robert and Charles Walker (Carrollton), Robyn Klinger (Carrollton) and Hart Walker (Jerseyville).

The prominent ICF mare saw her winning streaked snapped in a July 28 Hoosier Park Invitational. Nevertheless, she has over a 46 per cent career success rate (21 for 45) with lifetime earnings of more than $158,000.

Take Your Pick: Also returning from an unsuccessful trip to Indiana is the Jim Eaton trained trotter Walter White, a Hawthorne Open champ in early July. Juan Franco got the catch drive tonight behind the Cantab Hall 6-year-old trotter with a career bankroll of $411,126,

Walter White drew for the outside three posts and landed the seven, with Picky Picky Valor (Casey Leonard), victorious in the last two Hawthorne Open trots the six and Anna’s Lucky Star (Kyle Wilfong) the eight.

While Anna’s Lucky Star was the beaten favorite in her last three Open starts, the 4-year-old Nelson Willis trainee won her previous three races in Opens and boasts a career record of 19 victories in 31 trips to the starting gate. 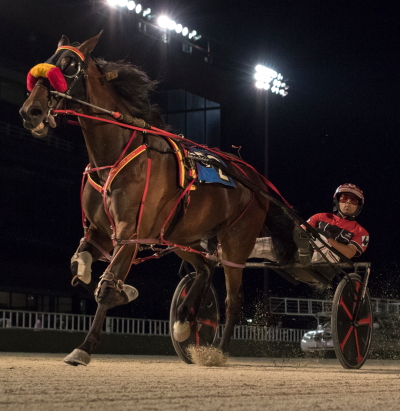 Welcome Back: Trashytonguetalker ($4.20) made a triumphant return to Hawthorne Friday night, drawing away in the first of two $10,000 Open Paces on the card and doing so in 1:50.3, a mile that equaled the lifetime mark of the 6-year-old pacer.

Casey Leonard urged Trashytonguetalker away from the starting gate and the 6-5 favorite was second at the 26.4 first quarter with Account Hanover (Ridge Warren) on the lead. Somestarsomewhere (Kyle Husted) rolled past to the top before the half was reached in 55.2 to take command and the field stayed that way until Casey tipped “Trashy” out in the final turn.

“Trashy” went on to pace a 54.2 last half to win by one and one-half lengths over Granite (Kyle Wilfong) for his eighth time in 10 season starts at Hawthorne.

One race later driver Kyle Wilfong gave Tookadiveoffdipper ($11.60) a perfect two-hole trip and the Mike Brink trainee zipped paced the pace-setting Hot Rod Dylan (Kyle Husted) near the eighth pole and went on to prevail by two lengths in 1:50.1, a time that equaled his previous best mile set last summer at Hoosier Park as a three-year-old.

On A Roll: Friday was also a very enjoyable night for your author who correctly selected the winners of the first six races that included a pair of double-digit mutuels. E R Vincent (Juan Franco) was a on top “Price Shot” in the third at at $13.40