As we await Wednesday’s double draw for the upcoming opening weekend of the 2020 Hawthorne harness racing meeting, Hawthorne has been a beehive of activity since it opened its backstretch to horsemen earlier this month while construction at the facility has been ongoing.

As far as the backside, the three largest stables as far as number of stalls assigned belong to trainers Kyle Husted with 26, Dean Eckley with 25 and Ronnie Roberts with 20.

Husted usually arrives from the east coast in early May with the start of Hawthorne’s summer session but with construction at the track in full gear during the daytime hours, the normal Hawthorne thoroughbred Spring meeting had to be shelved and the Illinois Standardbred community became the recipients of the much longer 2020 meeting (Feb. 15th through Sept. 20th). 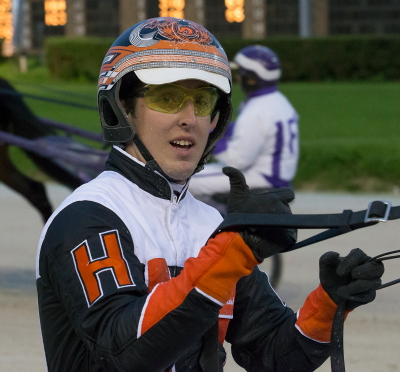 Kyle Husted has returns to his home state with a large contingent of horses in his barn. (Four Footed Fotos)

The 28-year-old Husted is coming off his most successful season as both a trainer and driver. The slender Altamont, Illinois native’s horses took in $1,081,236 in purse money, a single season career high and Kyle’s third consecutive year of $1 million plus in money won.

Husted left Illinois late last September for the east coast on a high note. He drove three first place stake horses on the 2019 Night of Champions, just as he did on Hawthorne’s 2018 showcase night of racing. Since 2016 Husted has nine Night of Champions ICF stake winners, one more than Hawthorne’s perennial driving titleholder Casey Leonard.

Zipping Along: Wednesday morning’s first qualifying races of the year at Hawthorne lured 80 horses, necessitating an even dozen events.

The fastest first place horse was Dave Samuelson’s Evco Lane, driven by his trainer Gary Rath. The four-year-old gelding sped to a 1:54.3 clocking. Rath sent Evco Lane to the front and the pacer was 14 lengths ahead of his nearest pursuer at the 55.2 half. By the three-quarters the margin grew to 20 lengths. Evco Lane coasted to a 30 second last quarter to finish four lengths ahead of runner-up Toxic Rock.

Welcome Back: Both past Chicago circuit driving titleholders Mike Oosting and Todd Warren were behind horses in last Wednesday’s qualifiers and are scheduled to do the same in Monday’s , a very positive indication they’ll be on hand to compete at Hawthorne until Hoosier Park opens their meet in late March.

Earlier Post: Hawthorne has changed its first race post for the 2020 meeting to 7:10 pm, 10 minutes earlier than last year. That translates into first race horses coming out on the track at 7:10 with the opener scheduled to go off at nightly at 7:15.

Horsemen: Note that paddock time for the first race is 4:15 pm while the first Lasix is at 3 o’clock.